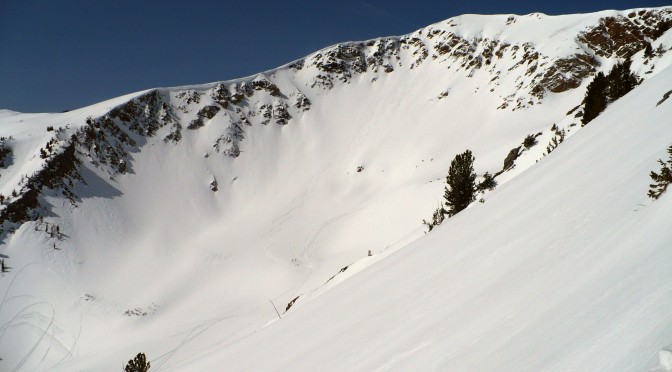 Mary Ellen Gulch has been part of Snowbird’s expansion plan for well over a decade. While the base of Snowbird lies in Little Cottonwood Canyon in Salt Lake County, its existing ski terrain in Mineral Basin and its undeveloped terrain in Mary Ellen Gulch, the next drainage to the south of Mineral Basin, lie in American Fork Canyon in Utah County. The county border follows the Little Cottonwood Canyon ridge line from American Fork Twin Peaks, through Snowbird’s ski terrain across Hidden Peak to Mount Baldy.

In November, Snowbird hoped to allay the concerns of Utah County residents and those devoted to protecting American Fork Canyon by announcing that Snowbird was abandoning any idea of expanding into the lower canyon to provide a second access point to the resort through Utah County at Tibble Fork Reservoir. An association of summer cabin owners near Silver Lake Flats Reservoir in American Fork Canyon, fearing that a connecting lift would pass near their properties, was particularly vocal in their opposition.

Snowbird president Bob Bonar confirmed on Tuesday that the resort is moving forward to seek county approvals to develop skiing and other amenities in upper Mary Ellen Gulch, adding literally hundreds of acres of skiing to its 2,500 existing skiable acres. It is likely that Snowbird would also extend its existing Mineral Basin Express chairlift further down the hill to connect with skiers returning from Mary Ellen Gulch via the proposed lift ascending Miller Hill, which separates Mary Ellen Gulch from Mineral Basin.

“We are interested in utilizing some of our private property in upper American Fork Canyon and have been listening to the myriad voices in the community who care about this special place,” Bonar said.

Mary Ellen Gulch was heavily mined for silver in the mid-19th century, and mine ruins and tailings piles still dot the landscape. The abandoned mining town of Forest City was once home to several thousand residents at Dutchman Flat, at the base of Mary Ellen Gulch, and included a smelter to process the ore hauled down from the mines. No residents or buildings remain in Forest City.

Not part of the culinary watershed along the Wasatch Front, American Fork Canyon now provides year-round recreation opportunities not permitted in many other Wasatch Mountain canyons. It is used by hikers, fishermen, campers, backpackers, dog lovers and four-wheelers in summer, and snowmobilers and backcountry skiers in winter. Groups representing many of these recreational interests have aligned themselves with Utah County politicians who have opposed any Snowbird expansion in American Fork Canyon.

Snowbird’s proposed expansion into Mary Ellen Gulch would also have no impact upon the contemplated One Wasatch interconnection between seven Utah ski resorts, including Snowbird. American Fork Canyon lies to the south of Snowbird, and the One Wasatch vision requires a connection to the resorts in Big Cottonwood Canyon and Park City, both situated to the northeast of Snowbird.

A hearing on the proposal before the Utah County Board of Adjustment was requested by Snowbird on December 8, and has been scheduled for 5:15 p.m. this Thursday.