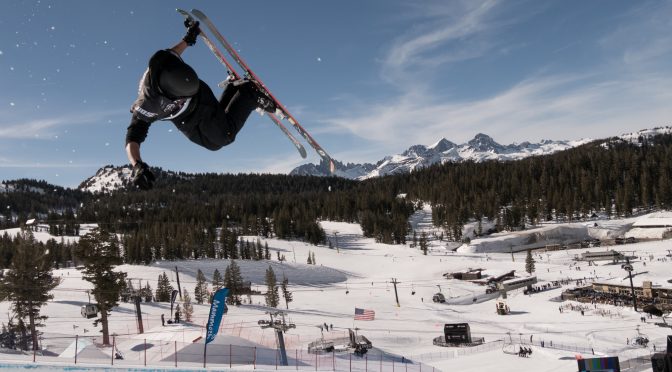 The competition also served as the first U.S. Olympic team qualifier for the freeskiers. Weather made an impact on the 2017 event, with snow throughout the week and high winds canceling the halfpipe final, which was scheduled to run on Saturday. Overall results were determined by the qualifying round results from Wednesday.

It was a big win for Yater-Wallace, who has struggled with downtime due to illness and injury over the past few seasons and was dealing with a bruised heel through the event. The win at Mammoth was his seventh career World Cup podium, though the last one came at Copper Mountain back in 2014. His winning run included a right double cork 1260 mute followed up by a left 1080 tail, switch right 720 mute, left 900 tail and right 900 tail on his last hit for a total score of 92.33 points.

Kenworthy scored his first podium of the year after winning the Toyota U.S. Grand Prix at Mammoth in 2016. “I don’t think I prepared for this event any differently than I would have for any other event,” the Telluride native said after the event. “The fact that it’s an Olympic qualifier definitely adds a lot of pressure, but I tried not to think too much about the stakes at hand and just focused on landing my run.”

Seaton has an excellent showing with a run that featured two more tricks than most other skiers. “I’ve been dreaming of doing this run since I was 14 years old,” Seaton said. “I think it just had to do with a lot of work on fundamentals, doing alley-oop 180s and really just trying to ride the transition of the pipe to squeeze all seven hits in.”

France’s Kevin Rolland still sits on top of the men’s World Cup rankings  with 129 points, although his advantage over his teammate Ben Valentin has now dropped to only four points. Following Saturday’s win Torin Yater-Wallace moved to third spot with 118 points after two competitions.

In the ladies’ contest Martinod, the top qualifier, took her second win of the season as she strengthens her position on top of the halfpipe World Cup ranking.

“Looking at the weather forecast, we knew the finals could get cancelled,” Martinod said following the award ceremony, “Together with my coach we decided to give it all in the qualifications, ski fast and jump high. It worked.”

Martinod’s winning run from qualifications included a huge straight air tail grab followed by a back-to-back 540 safety, left and right flair safety and a left 900 safety to finish off her run with 94.00 points.