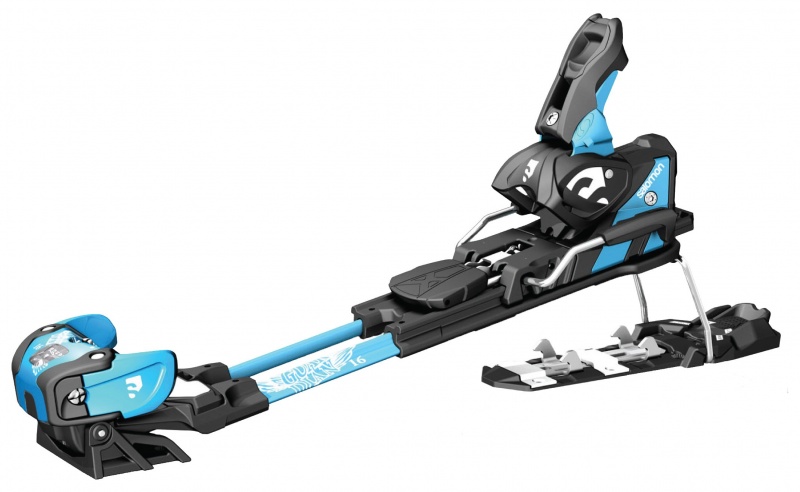 Ogden, UT – With more and more skiers venturing into the backcountry alpine touring (AT), or randonée, is the fastest growing ski equipment market segment. To a large degree, however, hard charging alpine skiers have had to sacrifice an element of solid downhill performance in favor of uphill capability if they want to skin to pristine lines. This is the gap that Amer Sports is aiming to fill with the company’s upcoming release announced today of the new Guardian 16 binding from Salomon and the Tracker 16 from Atomic.

“It’s no secret that in order to get fresh snow, if you’re into skiing powder the only way to really get good snow is if you’re willing to do a little bit of work to get there,” acknowledges Mike Aicher, Salomon North America’s Alpine Product Category Manager. “As resorts are getting more open to letting people access the backcountry, and as skiers are finding that lift-served powder gets tracked up pretty quickly in most resorts, it’s just a natural progression of the sport. People want access and they want to be able to get to the terrain that nobody has skied yet.”

Five years in development, the two bindings are identical except for labeling and paint jobs, and will first be available to consumers in fall 2012. They’re clearly aimed squarely at the Marker Duke, their nearest competitor in the field and currently the binding of choice for big, burly guys ripping big, burly sidecountry lines. Skiers looking to tour all day will find the binding too heavy for that purpose, but that’s not the market that Salomon and Atomic are aiming for.

“Our history as a brand has always concentrated on downhill performance and retention. It’s a natural fit for us to prioritize downhill performance first,” explains Aicher. “We’re basically going to create the most durable, easiest to use, best performing binding with a hike and ride mechanism out of the box. We’re not an uphill company currently, so to develop a binding that was more on the pure randonée style or super light weight touring style wouldn’t fit our DNA at this point.”

Unlike the Duke, these new offerings from Salomon and Atomic will feature a Hike & Ride Switch that doesn’t require the user to remove the ski to switch between climb and ski modes, a sometimes dangerous proposition in precarious spots. In fact, the heel piece has been designed using four steel teeth that are spring actuated to retain the heel piece in ski mode. This is intended to eliminate the “heel slop” that commonly develops in a traditional AT binding and also allows the user to simply lower the climbing bar and step down to engage the ski position, much like stepping into a traditional alpine ski binding.

“The engineering that went behind both the ability to make the ski flex round underfoot, and to maximize the lateral stiffness both when hiking and with skiing, are patented and is actually a spring loaded mechanism,” says Aicher. “The entire platform that the boot interfaces with the binding is rigid, but the plate that’s mounted to the ski has a spring loaded mechanism that  allows for free flex. It was one of the critical design elements of the skiability of the binding.”

The binding’s DIN range will be from 7 to 16 to accommodate the most aggressive skiers on the hill and two sizes of the binding will be available to accommodate different boot sole lengths. It’s designed to be used exclusively with alpine ski boots but the adjustable toe height will allow those with alpine touring boots to reach their own conclusions regarding compatibility.

Today’s announcement was long on anticipation and short on technical details, including weight, retail price, stack height (the height of the ski boot sole above the ski) and ramp angle, although both Aicher and Jenny Naftulin, Salomon Alpine Brand Manager, acknowledge that weight and retail price will be “comparable to its closest competitor,” clearly referencing the Duke which tips the scales at a hefty 47.1 oz./1335 g. Stack height is said to be somewhat lower than that of the Duke, which is 40mm at the heel and 32mm at the toe, as the rails of the Guardian 16 and Tracker 16 sit flush against the ski’s top skin. The Duke retails for $495, and the price of the Guardian 16 and Tracker 16 is expected to be announced by the company in about a month.