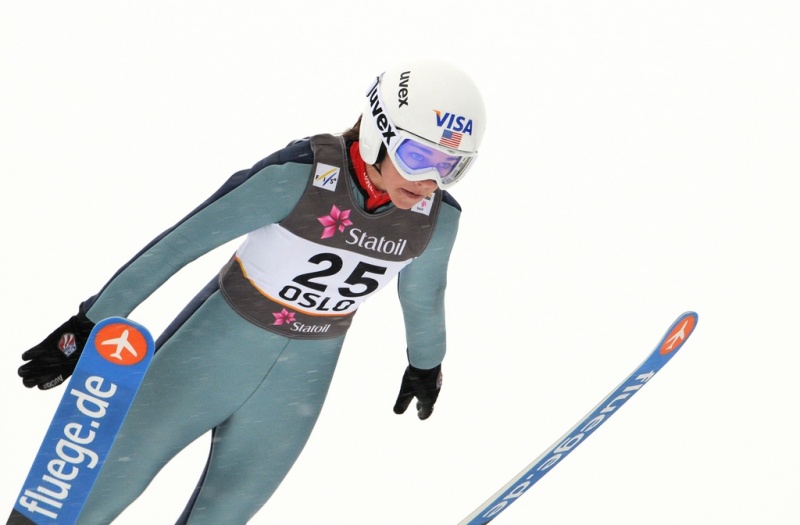 Hinterzarten, Germany – Park City, Utah’s Sarah Hendrickson took her second World Cup win on Sunday after only three events this season in a competition cut short after just one round by tricky wind and snow conditions.

“Yesterday was difficult with the weather and I haven’t been here in a couple of years,” Hendrickson said. “Today I got in another good training jump and got a feel for the hill. I was super confident after that and knew warming up that I could do it.

Hendrickson, who won the season opening event in Lillehammer, Norway last month, jumped into the lead after her first jump – a dominating 107.5 meter ride that second a women’s record on the HS108 jump. Jessica Jerome, also of Park City, joined second place finisher Sara Takanashi of Japan to round out the podium in third, after she and Hendrickson were the only two women to jump over 100 meters in the final round.

“It’s so awesome to see Jessica do that well. She had awesome jumps today and so did Lindsey (Van),” Hendrickson added. “To have three of us in the top 10 … No other nation can say that today. We train hard and compete well.”

“I got a lot of sleep last night and I woke up and felt good today and knew I was capable of having good jumps and doing well on this hill,” said a confident Jerome. “With the continued growth of the sport and it being more competitive than years ago, everyone is definitely fine-tuned and absolutely everything counts.”

The USA has landed on the podium in all World Cup events of this inaugural women’s ski jumping season.

Hendrickson now holds a secure 229-140 lead in the World Cup standings over Coline Mattel of France. Lindsey Van, also of Park City, is in fourth place despite missing the opening event due to ankle surgery and battling mono, after placing second on Saturday and finishing seventh on Sunday. The USA leads in the Nations Cup, with Germany in second.