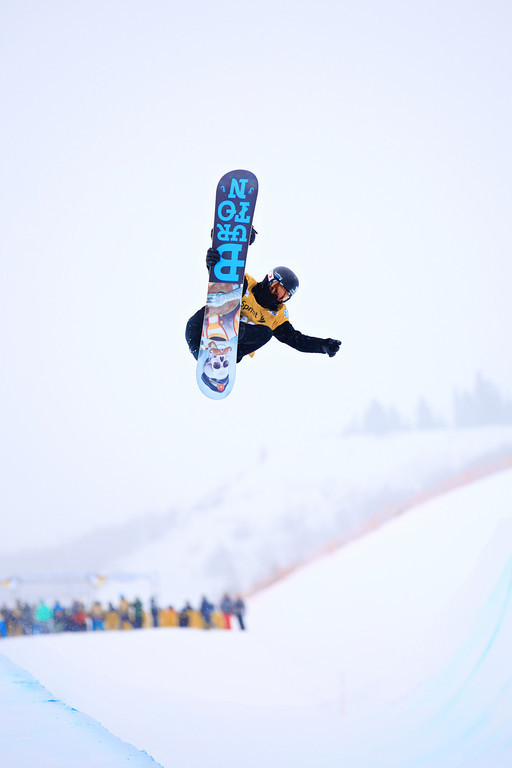 Liu, the fourth-place finisher in the 2010 Winter Olympic Games in Vancouver, took the top seat in the women’s finals at the second stop of the Sprint U.S. Grand Prix tour, which rewarded points for both the World Cup and the World Snowboard Tour as a 5Star event. A run consisting of a frontside indy air, method, frontside 540 stale fish, backside 540 mute, frontside 720 melon, and cab 720 earned her eighth career World Cup win after not finishing better than tenth in her last three starts. She also became the first Chinese rider to win a Grand Prix event.

“I’m very happy. Today is such a good day,” said Liu. “The pipe is good. Everything is perfect. All the girls were doing good so I’m happy to be first.”

“I landed a run that I felt pretty good about, but I could have done better. I expected more from myself, I was hoping to put down a better run,” Gold admitted. “In practice I shined myself pretty hard on the coping and it made me a bit timid during the contest. I was really just trying to land a run on my feet.”

Favorite Kelly Clark, of West Dover, Vt., fell on both of her runs to finish sixth, but still maintains a comfortable lead in the World Cup pursuit with 2,200 points.

On the men’s side, Olympic champion Shaun White, who earned the highest score of the day with a 97.3, led a U.S. sweep. The 26-year-old from Carlsbad, Calif., relied upon his last run consisting of a backside air, frontside 1080 double cork, cab 1080 double cork, frontside 540 stale fish, double McTwist, and alley oop rodeo 540 after falling on his first, and celebrated his career’s fourth World Cup win in five starts ahead of Olympic Bronze medalist Scotty Lago, of Seabrook, N.H., and Mammoth Lakes, Calif.’s Luke Mitrani, who finished in second and third, respectively.  Mitrani  sits in first in the World Cup chase, only 40 points ahead of Lago.

“It was a do or die scenario and I knew I was going to make that win happen,” said White, who made his first World Cup appearance 12 years ago when Park City Mountain Resort hosted its last World Cup. “This halfpipe has a little bit more vert than I had been riding. It encourages me when I fall like I did on my first run and I got a little angry. It makes a win so much more rewarding when you have to come from the back of the heat.

“Scotty (Lago) and Luke (Mitrani) put down amazing runs and for me it was a defining moment. I got really pumped up when they did that,” White added. “I felt the pressure – it was more of ‘I have to put down a run’ instead of ‘I want to put down a run.’ I am excited, I heard I might have helped to secure an Olympic spot for the U.S. team which would be great and hopefully next season I can claim one of those spots.”

Following today’s competition Gold and Mitrani were named Sprint U.S. Gand Prix Overall Champions, based on finishes at the Copper Mountain Grand Prix in Colorado and Park City Mountain Resort results, with a payday of $20,000 each for the series win.

“Winning the national champion award was such a treat and surprise,” said Gold. “I wasn’t expecting it and I am  honored to be up there.”

The Burton European Open is on tap Feb. 4-9 in Laax, Switzerland. The FIS World Cup now heads for Sochi, Russia with the Olympic test event in the halfpipe Feb. 13-14. FIS World Cups serve as platforms for individual athletes to gain minimum Olympic qualifying criteria as well as nations’ quota spots.

“Next up I am so excited to go to Sochi, the group of people I am going with could not be any better, my friends and my coaches,” said Gold. “I have heard the venue is amazing and I am extremely excited for it.”