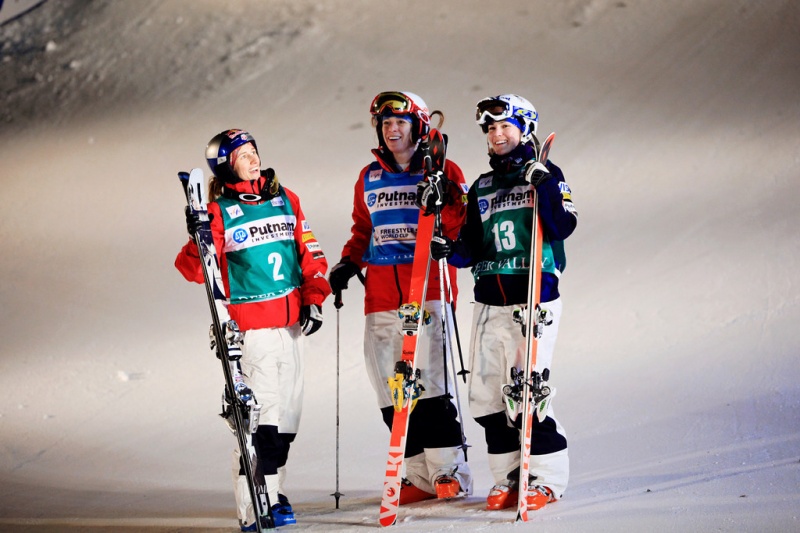 Park City, UT – Olympic champion Hannah Kearney led a USA sweep as the American women dominated in the Visa Freestyle International at Deer Valley Resort on Thursday. It was only the second USA women’s podium sweep in World Cup history, after a 2010 event at Whiteface Mountain near Lake Placid, N.Y.

“This clean sweep proves how hard we train and how talented our team is,” sai Kearney, of Norwich, Vt. “This should be happening more often.”

“I’m very excited, to do a podium here and win, it’s the best feeling,” said Kingsbury, 20, who earned his fourth win of the year and his 19th straight World Cup medal, including a win last year at Deer Valley, to lead the Freestyle standings. “It’s the best course in the world and I always look forward to this stop on the tour more than any other place. The course and the crowd and everything is just perfect here, so I’m just excited I won here again.”

Byron Wilson, of Butte, Mont., qualified fourth but suffered a concussion in training just before the Thursday night event.

The win boosted Kearney, who missed the opening two events due to a fall training injury, into third in the World Cup moguls standings. McPhie remained in second behind Canada’s Justine Duflour-Lapointe, who finished eighth on Thursday.

“I’m stronger than ever, even after my training injury earlier this season and I knew I could showcase that on this difficult course,” Kearney added. “This course is about endurance. It’s long and steep and I think as a team we were prepared for that. Deer Valley is a favorite stop on the circuit for our team and we put on a good show tonight.”

Moguls action continues on Saturday at Deer Valley with a dual competition.