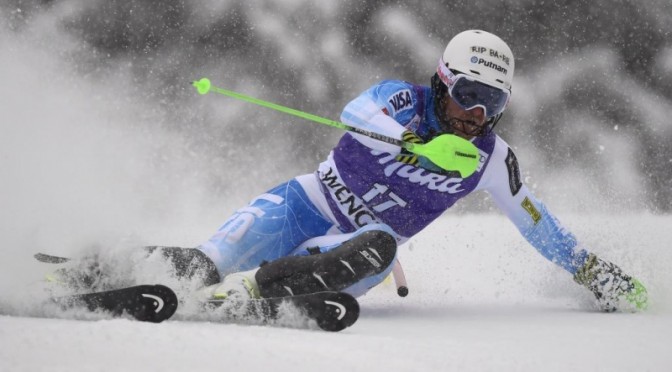 Wengen, Switzerland – Following Friday’s combined the World Cup men were back on the Wengen slalom hill again on Saturday, but this time for a traditional slalom. Felix Neureuther of Germany claimed his second win of the season.

“Congrats to Felix,” offered U.S. men’s head coach Sasha Rearick. “He woke up with some eye issue and could only see out of one eye this morning. Big congrats to him for pulling himself together—especially winning a big race like this with the conditions.”

With World Cup leader Marcel Hirscher of Austria straddling a gate on the first run, the race seemed like was anyone’s game. Neureuther took first, while Adelboden-winner Stefano Gross of Italy came in second and Henrik Kristofferson of Norway third.

Unlike Friday’s alpine combined, it started to snow—which meant low visibility and varying conditions down the course. Even with the course crew working to clear the 8 inches of new snow, the course quickly rutted up and hindered the later start positions. Americans have not won a World Cup in Wengen since 1982 and the team did nothing to improve upon that record on Saturday.

David Chodounsky, of Crested Butte, Colo. took 18th, while Park City, Utah’s Ted Ligety — who has has raced Wengen every year but one since 2005 and in the past five years has DNFed twice and was disqualified once — finished 27th.

“There’s only so much you can do today,” said Chodounsky after the first run. “Conditions are not ideal, which makes it really tough, especially for the back of the pack.”

Looking for his first World Cup podium, Chodounsky took some risk on both runs, but did not ski either one cleanly. He took 13th first run, and 18th overall.

After a fifth place in Friday’s alpine combined, Ligety had a few bobbles on his first run and was 24th. He looked for speed on the second run but couldn’t find it, getting caught up on the second pitch.

“Up top, Ted was OK, but down the pitch where it was easier, he just held on too much,” said Rearick.