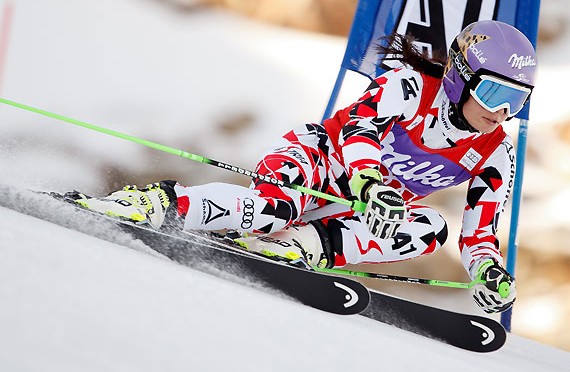 Soelden, Austria – Just three days before the opening of the World Cup Alpine ski racing season, Austrian athlete Anna Fenninger is out for the entire winter after suffering a severe knee injury in a training crash on the Rettenbach Glacier on Wednesday.

Following the injury, Fenninger was airlifted to a hospital in nearby Innsbruck, where she was diagnosed with tears of her anterior cruciate (ACL), and collateral ligaments, and the patellar tendon of her right knee. The Austrian Ski Federation has confirmed that she’ll miss the entire 2015-16 World Cup season.

Fenninger, who shared the top of the podium in Soelden last season with American Mikaela Shiffrin, has been plagued by knee problems for years, and missed a few weeks of training after leaving an on-snow session last month as a precaution.

Fenninger, 26, is the reigning Olympic super G champion and the World champion in the super G and giant slalom. She has won both the World Cup Overall and Giant Slalom titles the past two years, when she also came in second in downhill and super G. She added the World Cup Combined title to her trophy case in 2014-15.

With Fenninger and Tina Maze, the top two finishers in the World Cup overall the past two winters, out for the season, all eyes are now on American Lindsey Vonn to she if she can reclaim the Crystal Globe after time off to nurse injuries of her own. Maze has opted to sit out 2015-16, and Vonn has traveled to Soelden, but hasn’t yet confirmed whether or not she’ll enter Saturday’s giant slalom after recovering from an ankle fracture sustained while training this summer in New Zealand.