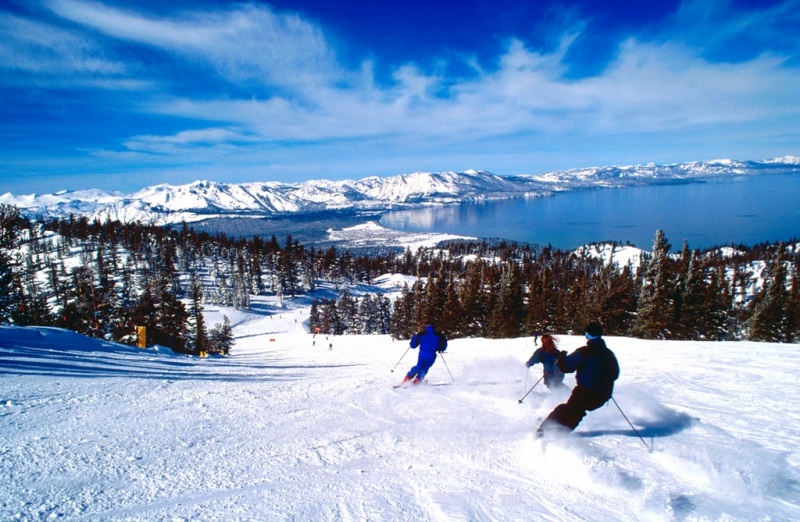 Lake Tahoe, CA/NV – Boasting more ski resorts in close proximity to one another than any other U.S. winter destination, and the only slope-side location offering 24/7 Vegas-style nightlife and entertainment, Lake Tahoe-area ski resorts will be upping the ante this winter with on-mountain upgrades, extensive lake-wide developments, new VIP experiences, new non-stop flights and the most promising El Niño weather scenario seen in the last half century.

Following several disappointing winters, ski resorts surrounding Lake Tahoe and all along the West Coast are all anxiously expecting a really big baby. With long-range weather forecasts calling for the biggest El Niño pattern in over 50 years, Lake Tahoe ski resorts are well-positioned to get first crack at the powerful storms that typically peel off the Pacific Ocean in El Niño years. Already home to the largest snowmaking systems on the West Coast, many of the resorts have nevertheless hedged their bets by upgrading their snowmaking systems with state-of-the-art technologies capable of covering the major runs top-to-bottom.

The Reno-Tahoe International Airport will be adding numerous new flights this season including non-stop service from John F. Kennedy Airport in New York. This announcement means East Coast skiers and snowboarders can now spend more time on the slopes without sacrificing travel days on each end of their vacation. To celebrate, the Lake Tahoe resorts are extending deals for those who ski the same day they fly including a free lift ticket at many of the regional mountains.

Celebrating its 60th anniversary this season, Heavenly Mountain Resort will be commemorating this milestone with free concerts, pop-up mobile DJ snowcats and themed Unbuckle at Tamarack après parties throughout the season. The resort will also be welcoming a flurry of new developments both at the top and bottom of its 2.4 mile-long gondola, tying together the Heavenly Village scene with the attractions found mid-mountain at Adventure Peak. This winter will mark the first full season of operations for the new Hard Rock Hotel and Casino along with the opening of The Chateau shopping center featuring retail storefronts, restaurants and bars directly adjacent to the gondola. Further new development is on the horizon in South Lake Tahoe with the recent groundbreaking on the $100 million Lodge at Edgewood Tahoe and the continuing trend of mom-and-pop motels being transformed into boutique luxury properties.

With more than 6,000 acres of skiable terrain already accessible via a single lift ticket, Squaw Valley/Alpine Meadows has announced plans to join the two resorts via an interconnecting gondola, bringing European style multi-mountain skiing to Lake Tahoe. The resorts are putting the finishing touches on a five year, $70 million “renaissance” that includes the newly replaced Siberia Express chairlift this season, upgraded to a high-speed six-pack. The resorts have also partnered with Burton Snowboards to host Burton Relax and Ride, a program geared toward women of all ability levels who have a tough time fitting winter sports into a busy schedule and crave a fun learning environment with friends. The two-hour group lesson includes Burton demo equipment, lunch and an afternoon spa treatment.

With capital investments surpassing $30 million over the past five seasons, Northstar California Resort is home to the mid-mountain Ritz-Carlton, Lake Tahoe. The resort overhauled its Big Springs gondola this off-season, shortening the travel time from the main village to the slopes. Expanding on the success of its launch last season, Northstar will once again be offering its Primo Private Lessons, giving guests carte blanche access to the mountain including expedited lift access, guided tours, private lessons, lunch/dinner reservations, spa treatments, childcare and beyond. The resort also plans to showcase locally-sourced, farm-to-mountaintop menus as part of its popular Mountain Table culinary experiences held on select dates throughout the season in the Zephyr Lodge.

Located less than 25 minutes from the Reno-Tahoe International Airport, Mt. Rose-Ski Tahoe has invested close to $1.2 million in on-mountain improvements this off-season with a significant expansion of its snowmaking system and the creation of the new Enchanted Forest Family Zone. The relocated and newly named Wizard Chairlift will access beginner-friendly terrain, including four new trails for first-time skiers and snowboarders. The resort also completed a number of renovation projects to its base area designed to expedite the morning registration process.

Kirkwood Mountain Resort continues to benefit from its acquisition by Vail Resorts with major upgrades to the resort’s infrastructure and mountain operations. The resort has expanded the next-level instruction available as part of its Expedition: Kirkwood program to include the new Discovery Series which focuses on boosting the confidence and skills of intermediates by exposing them to the unique and challenging terrain found only at Kirkwood. Guests can also gain an insider’s perspective to the resort’s terrain and powder stashes thanks to EpicMix Guide, an interactive application that draws from over 350 unique itineraries to generate a customized trail map to experience Kirkwood like a long-time local.

Sierra-at-Tahoe Resort continues to churn out Olympic caliber athletes with its trio of “golden girls” (Jamie Anderson, Hannah Teter and Maddie Bowman) often seen shredding in the resort’s terrain parks and halfpipes. Home to the Burton Star Wars Echo Base and Yoda’s Riglet Park, the resort has partnered with Burton again this season to enhance their Learn To Ride program with the reintroduction of the Burton Backhill, a classic board from the 1980’s that originally inspired kids to start standing sideways on snow. The vintage snowboards will be used to teach balance, movement and control in both dry land and beginner settings. The resort also plans to feature sustainable, organic food options in its Solstice Eatery, part of last year’s new $5 million Solstice Plaza, along with free yoga sessions to start each day on a positive note.

Sugar Bowl Resort celebrated its 75th anniversary last season by investing more than $20 million in on-mountain upgrades including the opening of the Crow’s Nest chairlift, the state-of-the-art Sporthaus aquatic center and the new Sugar Bowl Academy campus. This season the resort will be adding a new terrain park and a new Village Station to serve as a convenient portal to access the more than 200 km of groomed cross country trails recently acquired at Royal Gorge, North America’s largest cross country skiing center that also caters to snow biking and snow kiting. The resort has also partnered with nearby Woodward Tahoe to offer an exclusive combo season pass to access world-class indoor training facilities including skateboard ramps, foam pits and trampolines.

Homewood Mountain Resort will be expanding their skiable terrain to the top of Ellis Peak this season, adding 750 acres of gladed powder reserves and runs of close to 2,000 vertical feet with lake views that are certain to take guests’ breath away. The terrain will be accessed via enclosed snowcat by groups of no more than 10 people as part of a fully guided experience. Powder aficionados can also take advantage of the resort’s First Tracks Breakfast program, another VIP experience combining a hearty morning meal and access to the slopes an hour before the general public. Guests can stay at the lakefront West Shore Café and Inn to get a glimpse of the resort’s multi-million dollar expansion plans that include new chairlifts, a new mid-mountain day lodge and a completely overhauled base area.