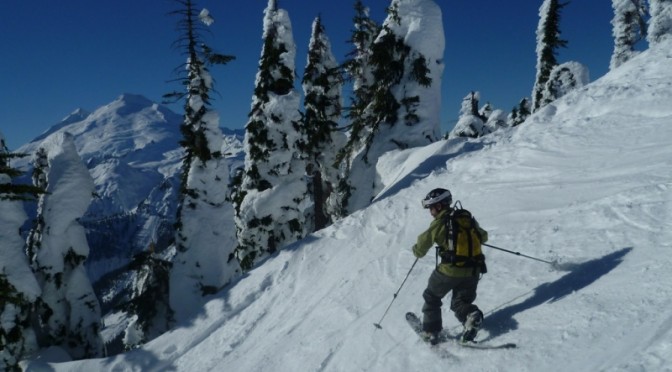 Bellingham, WA – At some point during our second day skiing at Mount Baker in Washington, we were meandering through steep, open woods when we came across a warning sign marked with a skull and crossbones: “non-survivable CLIFF!”

Considering the terrain that people routinely ski — and jump off of — at Baker, that must have been some cliff.

Mount Baker is a mountain for people who like it steep. Its statistics — 31 runs, 1,600 feet of vertical and eight chairlifts — do not capture the sheer ballsiness of this place.

To do that, just follow a ski track into the woods and see where it heads. Most often, it’ll be into terrain that will cause your knees to knock and your heart to rise to the back of your throat. Sometimes, it’ll end in a cliff of some sort, although generally a survivable one.

Suffice it to say, Baker is not a mountain for people who like cruisers.
It is certainly not a mountain on the ski destination circuit. Located two and a half hours northwest of Seattle, its remote location is at the end of a dead-end road, 20 miles above a town that has exactly one motel, one general store and a couple of eateries. The après-ski crowd on the mountain consists of a guy vacuuming the carpet in the base lodge and a few locals talking about their day in an empty cafeteria.

Although I am no raging huckster — I like my boards planted firmly on the ground, thank you very much — I was intrigued by Baker after a friend, Russ Zivkovich, went there a year earlier.

“Dude, it just puked snow all week!” Russ told me with characteristic enthusiasm.

Russ is probably the only primary care physician you’ll encounter in New York who’s sporting long rockstar hair. His two passions are race cars in the summer and skiing in the winter. He skis three days a week from December until April, and travels out west at least once a month during the season. In the 2011-2012 winter, he and a gang of Killington friends rented a house at Baker for a week. Those murky Northwest skies dropped five feet of powder while they were there. At one point, a massive slide in the backcountry took out a whole ridge, leaving behind a fracture line about 15 feet high — the base lodge has pictures. There was so much snow that the mountain was closed for a day due to trees fallen across the highway, and Russ and his pals had to entertain themselves by skiing down the road itself.

Of course, this is not the champagne powder of Colorado or Utah. The Northwest is famous for its “Cascade Concrete,” heavy with moisture carried aloft from the Pacific Ocean. But Baker’s base elevation starts at 3,500 feet, higher than many other Pacific Rim resorts, and when the temperature is cold enough and the snow is high enough, you won’t care about moisture content. Baker routinely gets more than 800 inches a season, and holds the ski resort world record for snowfall, at 1,140 inches (95 feet) during the 1998-99 winter.

So I joined Russ, another doctor friend named Steve, and Steve’s son Joe to see it for myself.

We landed in Seattle, picked up a rented minivan and quickly stuffed it with about $400 worth of groceries including steaks, salmon, two dozen eggs and enough bacon to craft a pig from scratch. Our destination was a rented apartment above a garage near the tiny Hamlet of Glacier: Mt. Baker Bed and Breakfast, owned by a snowboarder who goes by the name of Vel Vette.

At Glacier, at an elevation close to sea level, there was no snow to be seen — just a strange layer of ice crystals resulting from nights below freezing and the moist air. But as we drove up the road the next morning, through a canyon of thick, snow-covered evergreens, the mountains slowly exposed themselves. We passed an oft-photographed site where daring skiers jump over the road, reaching heights of up to 40 feet above moving vehicles and buses. When we arrived at the resort on this Monday morning, the parking lot was nearly deserted.

Even from the car, it was clear this is one of the most beautifully situated ski hills in North America. It’s named for Mount Baker, but that glacier-clad, 10,781-foot volcano is actually a few miles away. Baker is really on a shoulder of 9,131-foot Mount Shuksan, considered one of the most scenic mountains in the world. These mountains are surrounded by the lesser peaks of the North Cascades, mind-blowing in symmetry and verticality. This is an awe-inspiring place, and the views just got better as we rode the chairlift into the emerging sunlight.

A few things about why this mountain is such a find quickly became clear. For one, the price: $58 per day on weekends and holidays for 2015-16. For another, a complete lack of lift lines. During four weekdays of skiing here, we never had to wait more than a minute. It was a wonder how the resort stays in business.

A third benefit is it never seems to get too cold. Temperatures were in the 20s most days, with uncharacteristically bluebird skies for the entire week. Beautiful for gazing out at the wilderness, but not so nice for fresh snow. That puking powder was nowhere to be seen.

A two-foot storm had hit the resort about a week earlier, but by the time we arrived all the freshies were gone from the inbound terrain. Still, we made do with packed powder conditions, though some of the more popular trails were already getting scratchy. The blazing sun didn’t help matters, either; ski conditions deteriorated as the week went on.

Following my aggressive ski buddies, I quickly realized how serious a mountain Baker is. Though I’m no slouch, I was soon humbled by the steepness of even the marked trails. Many bowls and glades were steeper still, reaching pitches that had me sweating in no time, reducing my skills to survival skiing as I forced myself to make turns and not to lean into the slope.

The resort is divided into two halves, bifurcated in the middle by wilderness. Scattered throughout the inbounds area are some of those non-survivable cliffs, plus a lot more that you probably could survive if you knew what you were doing. Surrounding the resort on all sides is a huge swath of sidecountry, accessible via well-trodden boot tracks and catwalks.

With the exception of the Canyon Trail, a single diamond route that takes skiers through a narrow defile surrounded by cliff, most trails are wide and fairly indistinct. Indeed, the trails seem to exist mainly as a way for skiers to go from one glade or bowl to another.

On our second day of following my friends, I realized I was not yet up to the sheer difficulty of these routes. It was my first time skiing that winter, and I needed some time to go at my own pace, without them waiting impatiently for me at the bottom. So I excused myself for some solo confidence-building.

For inspiration, I looked to Radio Ron.

Every April at Killington, a school custodian from Ohio travels to Vermont to ski the soft, spring bumps for a week. He wears a purple 1980s-era one-piece and a set of radio headphones, the kind with the antenna that sticks up. He calls himself Radio Ron. Ron is also known for exclaiming “hut, hut, hut” as he hits the bumps, counting out a rhythm set, presumably, to whatever transmission his radio is receiving.

Though I lacked the jumpsuit and the radio, I still thought I might benefit with a variation on Ron’s technique. I parked myself at the top of a steep slope — one with a pitch wicked enough to make me sweat — and said “Turn.”

Soon, I had trained myself to turn on command, brainwashing myself to move past my fear.

By the time I caught up to my friends, they were ready to do some hiking. At the very top of Baker’s Lift 8, we headed out of bounds. There was still plenty of untracked snow to be had a week after the last storm, but the sun was slowly turning it into mashed potatoes. To access it, all you need are stout legs, avalanche gear, and the knowledge of how to use it.

So we strapped our skis to backpacks and began to climb a well-formed boot track to the top. Twenty minutes later, we were stripped down to our polypro in the warm Washington State sun. We drank some water, clicked into our skis and schussed away.

As we became more attuned to the mountain, we delved further and further into the sidecountry. One day, we spent more than an hour following an undulating ridge to a low-angle entrance to a huge snow bowl. This was the place that had avalanched so powerfully a year earlier. Now it was soft and safe, and we carved into it like kids running to a playground.

The bowl led down to a ledge system, which funneled us into a narrow chute that exited back to the resort. The chute was in the 50-degree range or maybe even more at the top, and only a few feet wide. One by one, my friends hit the chute from skier’s right, then disappeared. I stared down from the top. They waited, less than patiently.

What choice did I have? “Turn,” I commanded myself, and in no time I was in the chute.

The top of this elevator shaft was concave, and made entirely of ice. My skis, one below the other, touched the ice only at tip and tail. The rest of the skis hovered over air, quivering slightly. I was frozen in place, the small amount of contact I had with the surface slowly giving way. I felt like Wile E. Coyote, suddenly running off a cliff and standing over thin air, with just enough time to hold up a sign that said “Oops!” before he fell to the valley below.

I lacked the sign. But not the thin air.

Well, it was more of a slide, really. I kept my skis down and my butt to the hill, and flailed harmlessly down to the mushy powder below. Uninjured, I got up, wiped the excess snow off my Gore-Tex, and skied the rest of the way.

That’s pretty much how we passed our four days at Mount Baker, with days of hiking and hucking, sliding and carving as we explored the mountain. Nights, meanwhile, were spent eating rich, protein-filled dinners and watching British car shows. Did I mention there’s not a lot to do here in the evening?

It was about all you could ask for for a week of skiing with the guys. Except maybe some puking powder. Well, maybe next time.