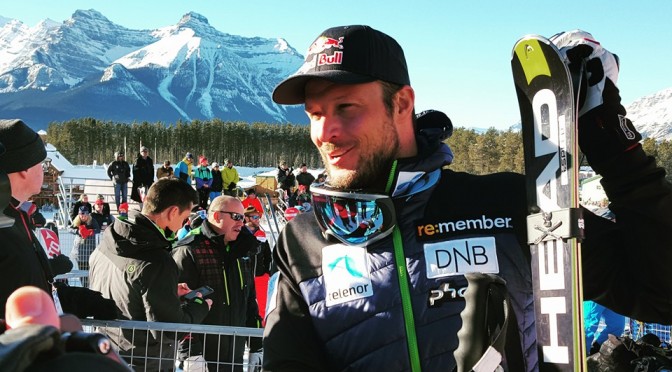 The day felt similar to Saturday’s downhill race in more ways than one. Pleasant temperatures, a nearly cloudless sky, and Italian Peter Fill laying down a fast time within the top of the order contributed to a sense that the magic of Bill Murray’s “Groundhog Day” could be in the air. Then Ganong, whose previous best super G result was sixth in Kitzbuehel in 2014, cracked in right behind Fill at 0.06 seconds slower. When Svindal made a costly error once again but still managed to come down in the lead, almost a half-second ahead of Fill, the potential podium looked nearly identical to Saturday’s with the addition of Austrian Max Franz tying Ganong for the final spot. But, Svindal took the win again, his ninth podium and eighth victory at the Canadian speed venue.

“It feels perfect. I was hoping I would be fast, maybe good enough to win races, but winning both that’s different, so I’m super, super happy about that,” Svindal said following his super G victory. “To ski fast builds confidence. It’s been a really good weekend in Lake Louise and if I can keep going like this, which doesn’t necessarily mean winning but fighting for the wins, that’s all you can ask for.”

Ganong was still stoked on the day, even though his was just .06 seconds off the podium. “It was good skiing today and solid, no big mistakes. I’m really happy,” said Ganong. “I think I lost like two-tenths in the first eight seconds, so that cost me the podium. I have bad shoulders and my thumb’s hurt so I can’t really push that hard. That’s kind of frustrating, but the skiing after that was good.”

The Truckee, Calif. native, who had surgery on his thumb last week, leaves Lake Louise with a podium and a career-best super G result, indicating that he could be a serious threat in two disciplines on the tour this winter.

“I’ve always been really fast in training in super G, I just haven’t had a breakthrough like this yet in my super G career. So it’s really awesome to start chipping away at super G as well,” said Ganong. “In training I do it all the time with Svindal and these guys, we train with them (the Norwegian team) and are right in there with them. It’s good to get one on race day.”

Utah’s Steven Nyman, finishing 21st, and Andrew Weibrecht, of Lake Placid, N.Y. in 26th were the only other scoring athletes from the U.S. Ski Team. Weibrecht was lucky to emerge unscathed from the race after he launched off the final air on course and his tips drifted toward the sky.

“I thought I was not going to pull that together, actually, and I just did. So I’m happy about that. That’s my one takeaway from the day,” admitted Weibrecht.

More than 4,500 spectators were present for Saturday’s downhill, 3,500 on Sunday for the super G and over 600 at the awards ceremony on Saturday.The World Cup men now move on to Beaver Creek, Colo. to race downhill, super G, and giant slalom starting Dec. 4.