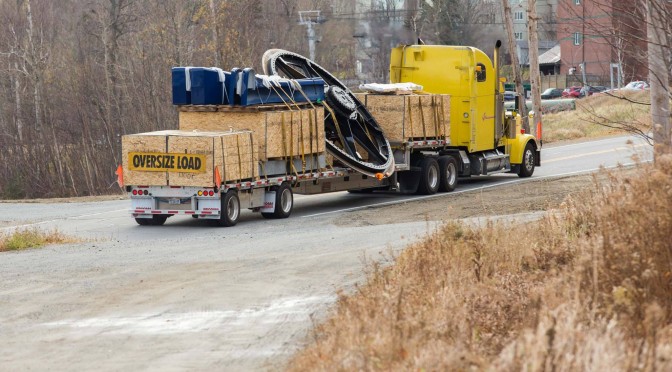 Carrabassett Valley, ME – The Maine agency responsible for inspecting the state’s ski lifts has completed its report following an investigation into a ski lift accident at Sugarloaf last March that injured seven riders.

John H. Burpee, Chief Boiler/Elevator and Tramway Inspector for the Maine Office of Professional and Occupational Regulation, has found that a series of mechanical failures on March 21, 2015 caused the incident on Sugarloaf’s King Pine chairlift, a Borvig fixed grip quad installed in 1988. The series of events began with a decoupling of the lift’s high-speed gearbox from its low-speed gearbox, disconnecting the lift’s bullwheel from its drive system. When this happened, the lift’s anti-rollback device — or “drop dog” — did not engage and its emergency brake did not automatically stop the lift as intended, allowing the chairlift to roll backwards for 550 feet, or approximately 10 chair lengths.

The fully loaded lift actually accelerated in reverse before it was eventually stopped by a lift operator manually deploying the emergency brake. A number of riders jumped from the lift before it stopped, and seven riders were injured, although none of the injuries was deemed to be life-threatening.

Burpee’s inspection found that the lift’s sun gear thrust bearing had failed prior to the March accident but that failure went unnoticed by Sugarloaf’s lift maintenance personnel. This allowed the lift’s low speed torsion shaft and coupling to settle on the bullwheel hollow shaft, which caused wear over time.  The failure of the coupling teeth disconnected the bullwheel from the drive system, causing the motor, service brake, high speed rollback pinion and high speed gearbox to become disconnected from the low speed gearbox. Once that happened, and there was no longer anything driving the lift, upward momentum stopped and the lift began to roll backwards.

Burpee’s report indicates that neither the lift’s rollback prevention device nor emergency safety brake functioned correctly. Reacting to the report, Sugarloaf President and General Manager Karl Strand indicates that all manufacturer recommended maintenance was performed on the lift prior to the accident, and that the lift was inspected by Burpee’s department in October 2014 and given a certificate of operation.

“In his report, the Inspector stated that it is critical that recommended maintenance procedures and inspection intervals on gear sets and associated drive systems are followed and incorporated into a lift maintenance program. We agree, and it is important to note that the King Pine lift was maintained to all manufacturer recommendations, and was inspected by the State of Maine and an independent lift engineer prior to the season,” Strand said in a prepared statement.

He took issue, however, with the report’s findings that the lift’s emergency brake did not function as intended.

“The report concludes that the lift’s emergency brake did not engage automatically, as it was designed to do. While our engineers’ findings lead them to believe that the emergency brake did in fact deploy automatically, we do not dispute the findings of the Inspector and recognize that definitive proof of the brake’s behavior during the accident is lacking,” Strand continued. “Ultimately the accident was the result of a confluence of mechanical failures, not attributable to any one single factor.”

Burpee also criticized Sugarloaf officials for not maintaining the accident scene for his group’s inspection. “While there is a need to make the scene safe, some of the lift’s mechanical components were adjusted and/or removed prior to the investigation making it impossible to completely re-create or simulate the conditions that existed when the accident occurred,” he wrote.

His report cites the removal of the lift’s underspeed switch that activates the anti-rollback drop dog, preventing him from knowing how it was adjusted. “Depending the installation, the adjustment of the underspeed switch on the King Pine lift could be quite sensitive. If adjustment is needed, even minor adjustments can affect the operation of the drop dog, making it function improperly.”

Strand indicates that this was done in the interest of guest safety. “In the immediate aftermath of the rollback, the first priority of Sugarloaf’s personnel was to ensure that the lift would not move further and risk additional injury to guests,” his statement continues. “In securing the lift, certain components were moved or adjusted from their original positions to ensure that there was no possibility of further movement of the lift while the evacuation of guests was ongoing.”

The incident with King Pine last March was Sugarloaf’s second chairlift mishap in recent years, following a derailment of the resort’s Spillway East chairlift in December 2010. In response, Sugarloaf has made adjustments to its lift maintenance procedures and hired Brent Larson as its new Director of Lifts to oversee the changes.

“In the months since the (King Pine) accident Sugarloaf has worked with engineers and lift experts to identify new inspection techniques that will better enable mechanics to identify abnormal wear or defects to components located within a lift’s gearbox. These include borescope inspections, which utilize small optical tools to view areas that would otherwise not be visible,” Strand indicates. “This type of inspection is not explicitly recommended by lift manufacturers or required by regulators, and is more typically used in maintenance of machinery like nuclear reactor heads and aviation turbines. Borescope inspections were conducted on gear boxes in all of Sugarloaf’s lifts this summer, and will now be a standard part of Sugarloaf’s lift maintenance program.”

This summer, Sugarloaf spent $800,000 to replace all but King Pine’s towers and chairs with a new lift featuring a new gearbox, the latest safeguards and anti-rollback technology.