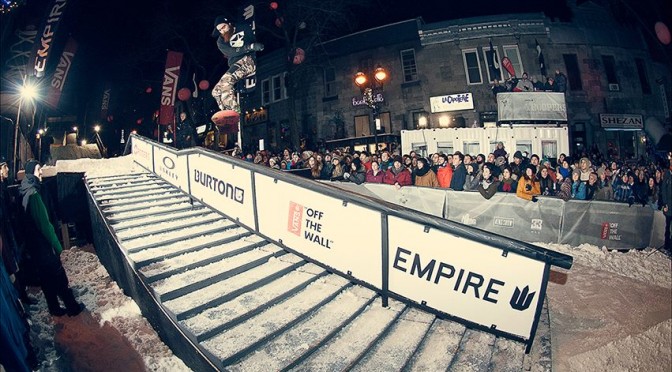 Taking place on Saint-Denis Street, between Sherbrooke and Ontario, 35 invited guest athletes including Jeremy Cloutier, Zach Aller and Will Lavigne and an open field will compete for their share of Empire City Troopers’ C$15,000 prize purse on Canada’s longest urban snowboard setup: 25 feet high, 250 feet long, following the natural curve of rue Saint-Denis. The course includes three features and for the occasion, some 7,000 cubic feet of snow will be trucked to the event site.

Qualifiers will take place from 2:30 to 4:30 p.m., with the semi-finals getting underway at 7 p.m. followed by the finals beginning at 9:15 p.m. Registration is available online at thinkempire.com/citytroopers.

The event is free for spectators to attend. Last year, over 12,500 snowboarding fans filled Saint-Denis Street to witness the action.

“Transporting that mountain spirit to the city really has a way of democratizing snowboarding. That makes Empire City Troopers much more than a competition, it’s a unique opportunity to discover and rediscover a certain type of discipline,” says Micah Desforges, President of Tribu Expérientiel, the event’s producer. “Quebec is an international platform for street snowboarding, so it’s an important venue for snowboarders from here and elsewhere; to come to Montreal and do their best.”

Children ages 3 to 6 can take their first snowboard lessons from noon to 2 p.m. Adults can enjoy an after-party at l’Abreuvoir beginning at 10:30 p.m., following the awards.