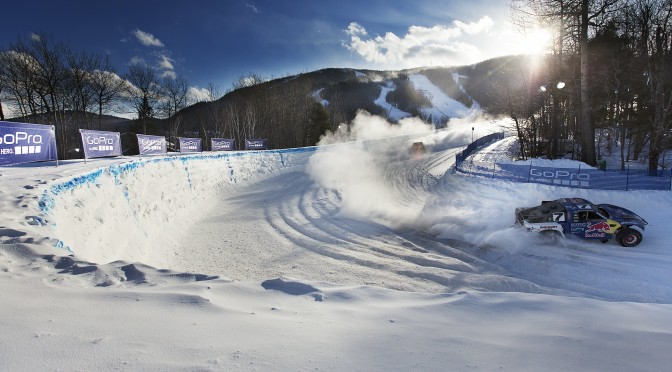 Newry, ME – Sunday River Resort in Maine will host Red Bull Frozen Rush for the third year in a row this Friday, when nine drivers will compete head-to-head in the only on-snow Pro4 truck race as part of the Red Bull Signature Series.

With the world’s largest high-pressure snowmaking system, Sunday River is able to pump 8,100 gallons of water and 54,000 cubic feet of air per minute. That capacity allows the resort to run over 300 snow guns at once across multiple peaks, averaging snowmaking on 15-20 trails per night — enough to create a course for Frozen Rush and satisfy skiing guests, despite Mother Nature’s fickle whims in the Northeast this winter.

“There is a reason Sunday River is known for having the most dependable snow in New England,” Dana Bullen, resort president and general manager, says. “Our snowmakers are passionate about snow. They take great pride in having the resources and ability to create the Frozen Rush course while continuing to open plenty of terrain for our guests.”

The Frozen Rush course consists of berms, jumps, and a short and long track. Competitors race head-to-head in trucks built with 900-horsepower engines and BF Goodrich custom studded tires. Past winners Bryce Menzies and Ricky Johnson return this year with seven other drivers, including Scott Douglas, Rob MacCachren, and Carl Renezeder, who return for their third year of competition. Last year’s newcomers, RJ Anderson and Chad Hord, will also be bringing the heat to Maine. Johnny Greaves will be back for another shot at the title, one he narrowly missed just two years ago, while his son CJ Greaves will hit the snow for his first time after a record-breaking season in the Pro4 off-road series.

The event will take place on Sunday River’s Lower Lazy River, Mixing Bowl, and Lower Broadway ski trails in the resort’s South Ridge region. Spectating is free on foot. The competition will air as part of the Red Bull Signature Series on NBC on January 30.