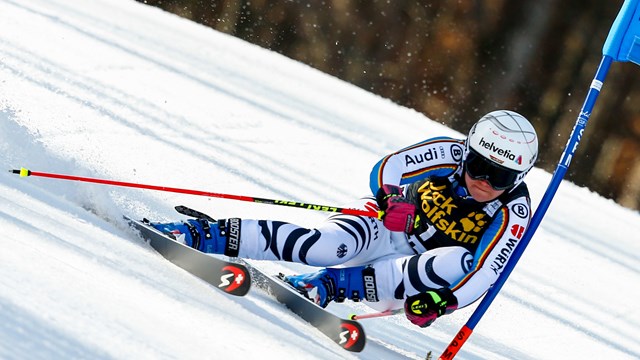 Maribor, Slovenia – Lindsey Vonn hoped to extend her World Cup win streak to 76 and her overall Audi FIS Ski World Cup lead in Saturday’s giant slalom in Maribor, but a soft, sugary course got the best of both her and Switzerland’s Lara Gut, her top competitor in the hunt for the overall title, as Germany’s Viktoria Rebensburg took the win.

On a warm day in Maribor, Vonn crashed on her second run, taking out a course worker and photographer. However, she got up and skied into the finish. Gut was in prime position to move into the overall World Cup lead, but skied off course in the second run and failed to finish.

“I got a little unlucky with the bib number,” said Vonn, who drew bib 15 and finished 12th in the first run. “The snow unfortunately just isn’t holding up for the later numbers. They did a great job preparing, and it was actually cold last night. I thought it was going to be really good, but it’s like sugar.”

Megan McJames was the only other American competitor in the race, and did not finish the first run.