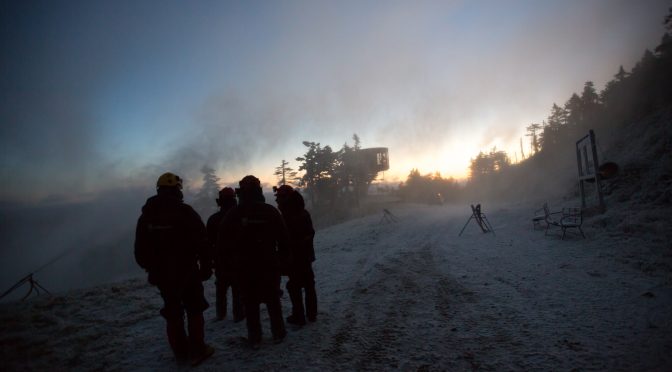 Killington, VT – With the first World Cup stop on the East Coast in decades now only six weeks away, Killington snowmakers have begun building a base for the world’s fastest women.

Snowmaking lit up on Killington and Skye Peaks just before dawn on Monday, building stockpiles for both public consumption on North Ridge trails and the approaching Audi FIS Ski World Cup races on the resort’s Superstar trail. In addition to summer snowmaking improvements to the water lines, Killington has dedicated a snowmaking team to specifically build the race venue on Superstar where the women’s slalom and giant slalom races will take place Nov. 26-27. Killington’s powerful snowmaking system has the ability to pump more than 720,000 gallons of water into 240 snow guns, covering 80 acres with 12 inches of fresh snow in a matter of hours.

“Our operations team has snowmaking and grooming down to a science, which makes Killington able to host an event of this magnitude early in the season,” said Mike Solimano, President and General Manager of Killington Resort. “Hosting the World Cup is a tremendous opportunity for both Killington and the East in general. We are preparing for a successful event regardless of how much powder Mother Nature drops between now and Thanksgiving.”

Killington will be the first ski mountain in the eastern U.S. to host an Alpine World Cup event in 25 years. The general public is invited to view the women’s giant slalom and slalom races in a free general admission area, which will accommodate approximately 7,500 spectators. Free parking and shuttle buses for event spectators will be provided during the weekend. Appropriate attire for winter weather is recommended for the outdoor venue, including sturdy waterproof shoes and multiple layers. No pets, lawn chairs or coolers will be permitted in the Expo Village. In addition, rock band O.A.R. will headline a music and entertainment lineup for World Cup spectators.