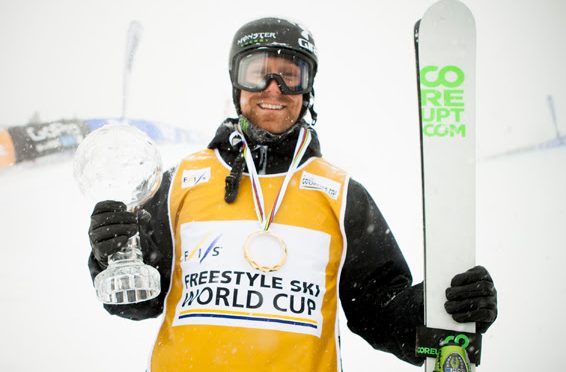 Vancouver (BC), Canada – After a career that lasted more than a decade, Canadian halfpipe skier Justin Dorey, of Vernon, B.C., on Tuesday officially announced his retirement.

Dorey steps away from the sport after not competing during the 2015-16 season to recover from a concussion suffered during a non-skiing activity in the previous off-season. The 28-year-old had a distinguished career that saw him help develop the sport with his unique style and high amplitude tricks. Dorey is a 2014 Olympian, the 2014 FIS Crystal Globe Champion, 2012 Dew Tour champion, 2011 AFP World Champion, and a 2009 FIS World Championship silver medalist, to name just a few of his accomplishments.

“Skiing has given me the best memories of my life so far. Winning the Dew Tour was a huge highlight for me,” said Dorey. “My most memorable moment of my ski career was finishing second at the Dew Tour and being on the podium with Tanner Hall, who I idolized growing up. Since that day I’ve been lucky to have many dreams come true.”

Dorey was just a kid from Vernon who watched ski movies of people like Hall when he got inspired to pursue freestyle skiing. A Canadian halfpipe program had not yet been developed, so he joined Trennon Paynter’s unofficial national team with freestyle superstars such as Sarah Burke, Mike Riddle, and Roz Groenewoud. Their group was the first organized team with a coach on tour that traveled to competitions together. They helped revolutionize halfpipe skiing.

“I was a pretty good skier, but I couldn’t keep it together before joining the team. I wasn’t on the right track,” said Dorey. “The first year I joined the team was one of the best seasons of my life. I landed every single finals run and even hit a few podiums. My improvement that season was the direct result of joining Trennon and the team. The group dynamic of our crew was exactly what I needed and the team eventually turned into family.

“Trennon is more dedicated than anyone I’ve ever met in coaching. He’s a member of family and has been there with us for so long,” added Dorey. “He’s someone I can always count on and someone who won’t beat around the bush to tell you the truth. He really understands how we all work differently and uses it to our advantage.”

For his part, Paynter views Dorey as a key contributor to the freestyle and halfpipe movement.

“Justin is one of the most influential halfpipe skiers of all time. His combination of massive amplitude, beautiful style, and technical progression, has long held him in high regard by the international ski and snowboard community,” said Paynter. “His legendary work ethic inspires the next generation of Canadian halfpipe athletes to work harder in pursuit of their goals. He will always be a member of our family, and we wish him the best as he moves into new challenges and goals.”

Dorey cites competing in the 2014 Sochi Winter Games as one of the most memorable experiences of his life. The moment changed Dorey’s outlook on how he perceived Olympic Games as a whole with the inclusion of halfpipe skiing to the list of events for the first time in Olympic history.

“When the Olympic announcement happened it kind of divided the skiing community. I wasn’t 100% sold on the Olympics because I didn’t grow up watching it and I wasn’t a real fan,” said Dorey. “I didn’t identify with the sports. Trennon kept telling us that it would be the most memorable experience of our lives and the biggest opportunity. I didn’t understand the magnitude of going to the Olympics. It was the pinnacle of our sport, but I didn’t know it yet. Going there changed everything for me and I’ll be a massive fan of the Olympics for the rest of my life. To be a part of it was a mind-blowing experience.”

Dorey will forever been known as one of the sports innovators and one of the most successful athletes in its history.

“Justin was a well respected athlete among his peers and always leading by example with very a strong work ethic,” said David Mirota, Vice President of Sport for the Canadian Freestyle Ski Association. “He has always been a great ambassador, ensuring the creative and style elements of halfpipe remained at the core of the sport.”

Now Dorey will begin his next phase in life as a student at Capilano University in North Vancouver, pursuing a bachelor degree in business administration.