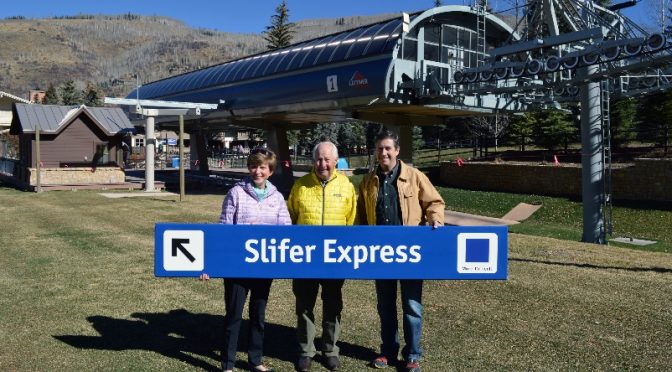 Vail, CO – Vail Mountain in Colorado has recognized long-time local skier Rod Slifer for his commitment to the community for more than 50 years. Expresso, a blue run at Vail, has been renamed to Slifer Express in honor of Slifer. Slifer Express is located on the front side of Vail Mountain and can be accessed from the Mountaintop Express Lift (#4).

Slifer’s introduction to Vail Mountain came after being hired by then-mountain owner, Vail Associates, in the spring of 1962. Slifer served as the assistant ski school director during his first winter in Vail. He went on to work in real estate, initially for Vail Associates and eventually starting his own firm, Slifer Smith and Frampton Real Estate. Slifer, alongside Pete Seibert, Earl Eaton and Morrie Shepard, named many of the runs on Vail Mountain during the resort’s inception.

“Rod has been one of Vail’s greatest ambassadors,” said Chris Jarnot, Executive Vice President and COO at Vail Mountain. “After naming many of the runs on Vail Mountain, including famously Tourist Trap, we are thrilled to honor him with his own run for his enormous contribution to Vail’s success from before it was Vail all the way through today.”