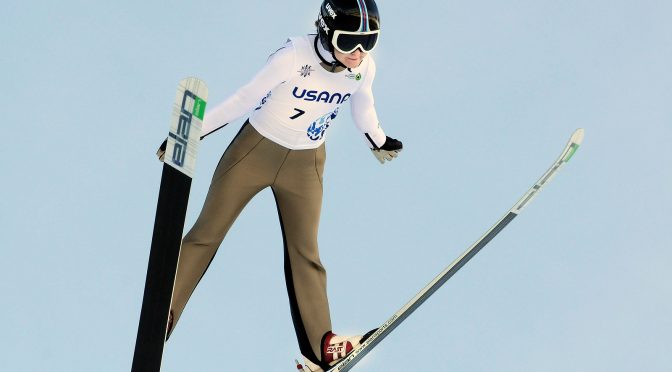 Park City, UT – Six-year- old Anna Hoffman sat on the bar atop of the 20-meter jump at the Utah Olympic Park in Park City. Next to her was one of the leading ski jumpers in America, Lindsey Van, offering words of encouragement. Young Anna was calm and collected, helmet and goggles on her head and skis fixed to her feet, gingerly placing them into the porcelain ski track for her trip down the inrun. It was a long way from her home jump at the Blackhawk Ski Club outside Madison, Wisc.

That was a decade ago. Anna was the youngest of the girls assembled at the Olympic jumping complex for a first-ever camp with the newly named members of the debut national team which was already eager to motivate the next generation of ski jumpers. It would be nearly three years until Lindsey Van would win her sport’s first World Championship, and nearly eight until women’s jumpers would soar off Olympic jumps for the first time in Sochi.

Over this past New Year’s weekend, Hoffman was back again at the Utah Olympic Park. But this time she was a confident 16-year-old vying for a spot on the Nordic Junior World Championship team that will compete against athletes from around the world in Utah this February.

Ski jumping is in Anna’s DNA. It was what her family did. “I started ski jumping when I was two,” she said. Older sister Elyse, a member of the first national development team, and brother Joe paved the way. “Since then my family and I had been traveling all over the Midwest. We heard about this girls camp in Park City and we were all in for it!”

Her early heroes were pioneering women from the Midwest – Karla Keck and Blaire Tompten – along with Lindsey Van of Park City, one of the early international stars of women’s ski jumping.

“I always thought Sarah Hendrickson was really interesting,” said Hoffmann. “I remember when she was nine years old and wanted to jump on the big hill!”

“It’s funny for me to see the pictures from that camp,” said Van, now retired and finishing school at the University of Utah. “I remember it well – we had young girls from all over the country. I’m happy to see some of those athletes from those early camps are still ski jumping and having success. If we motivated any of those girls from those early camps to keep ski jumping then it was worth it.”

There’s a great heritage for ski jumping in the Midwest that lives on at the Blackhawk jumping complex west of Madison. Hoffmann got her start on the tiny 5 and 15-meter jumps, and drew inspiration from her heroes. After becoming one of the top young jumpers in the USSA’s Central Division, thanks to work of her coaches at Blackhawk, she next moved up to Women’s Ski Jumping U.S.A. innovative Fly Girls program – a pathway to bridge motivated young girls up to the next level. And she eventually followed her sister’s footsteps onto the national development team.

“Anna is a product of a lot of club work with Blackhawk and three years on the Fly Girls team and now development team,” said Women’s Ski Jumping U.S.A. Coach Alan Alborn. “Anna has been really working hard and focused on pushing her level higher which is starting to blossom on the ski jump.”

Last winter, Hoffman won the national junior title. This past summer she had her first taste of jumping overseas, with a camp in Slovenia and competition in Hinterzarten, Germany. Earlier in December, she competed in her first Continental Cup in Norway – jumping against the largest field ever in a COC event.

“Slovenia was the most fun I’ve had in a long time – to be with my teammates, who are like my sisters, and to go to places I had only heard about,” she said. “I wasn’t worrying about how I finished; I just wanted to enjoy the experience. I learned a lot.”

But on a clear, cold late December morning, she was perched again at the top of the inrun – this time the Olympic HS100 meter tower, a jump that has become like a second home over the years.

Climbing out onto the bar, her focus was clear. But she was scared. Making the Junior Worlds team was her primary goal this year. She knew she could jump better than she had in the Steamboat qualifier, when she was fifth. But on her final training ride the day before, she had crashed hard.

Her four competition jumps over two days would be the most important of her young career. If she wanted a trip to Junior Worlds, she had to step it up.

“I was scared I was going to fall again,” she said. “But I thought about how many jumps I’ve taken on that hill and not fallen. I focused on the inrun knowing that every good jump comes from a good inrun.”

She pushed off, gliding down the track and off into the air. 86.5 meters – decent, but not enough as she stood second. Her next jump had to be better. It was – 88.5 meters to take a narrow win.

The next day, it was all on the line again. With a first jump of 88.5 meters and longest ride of the day at 89.5 on her second, she swept the qualifiers.

She’ll now be joining the best juniors in the world Jan. 30-Feb. 5 at the Utah Olympic Park.

“I’m just really, really excited,” said Hoffmann with passion. “Being a young kid so immersed in ski jumping, I’ve always wanted to be like the other girls and go to these big competitions. It means so much to me that I can represent the USA at Junior Worlds in my country.