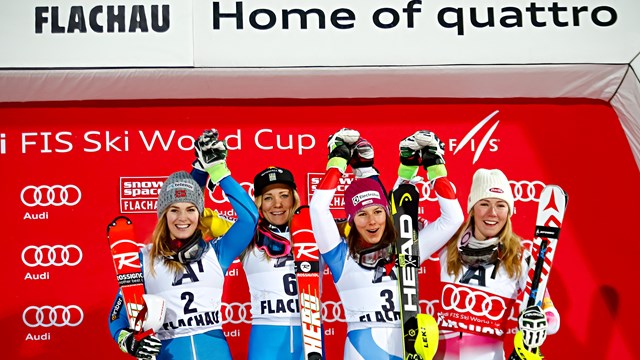 Flachau, Austria – Colorado’s Mikaela Shiffrin rebounded from a disappointing first run to land on the podium in a tie for third Tuesday night under the lights at the Audi FIS Ski World Cup slalom in Flachau.

Sweden’s Frida Hansdotter, the defending World Cup slalom champion, won her first slalom of the season and claimed the Snow Space Princess crown by 0.58 over Norway’s Nina Loeseth in second, while Shiffrin and Switzerland’s Wendy Holdener tied for third 0.78 back.

Hansdotter laid down a head-turning first run that shocked those in attendance, if only for the fact that she just claimed her first podium of the season two days earlier after an otherwise up-and-down winter.

“No, actually [I didn’t know it was] that fast, but for sure I felt I had a good run,” Hansdotter admitted. “But I got a little bit scared when in the banana [delay gate] because I hooked a little bit the skis. I was like ‘Oh no!’ I didn’t get that speed over the last roller. But it was really good, so I’m satisfied.”

“I just didn’t ski fast, and that’s pretty much it,” Shiffrin said after her first run. “There are a lot of things … it’s easy to lose that kind of time if you ski a couple of turns a little bit tentative. So I have to try harder.”

With an angry look of determination in her eyes, Shiffrin blazed the second run, posting the fastest time to move atop the leaderboard. However, her first run deficit was just too much to overcome to reach the top step of the podium.

“The second run, I definitely went for it,” Shiffrin said. “I’m happy to be on the podium with that, but I have to say congratulations to Frida. I’m really happy for her. She skied amazing and it was really fun to watch.”

Shiffrin extended her overall World Cup lead (1,008 points) over Switzerland’s Lara Gut (643), who did not finish the first run Tuesday. Shiffrin also leads the overall World Cup slalom standings with 560 points over Veronika Velez Zuzulova with 435 points. Flachau was the final World Cup slalom event prior to next month’s World Championships in St. Moritz, Switzerland. So now Shiffrin has her eyes on this weekend’s World Cup super combined (super G and slalom) in Altenmark-Zauchensee, Austria to fine-tune her form.

“I think that I want to go to (Altenmark-Zauchensee) anyway since it’s a super combined and I’ll be training slalom for that,” she said. “After the first run today, I want to get back in slalom gates and try to get my feeling back.”

Up next, the women’s compete in downhill Saturday and super combined Sunday in Altenmark-Zauchensee, Austria.