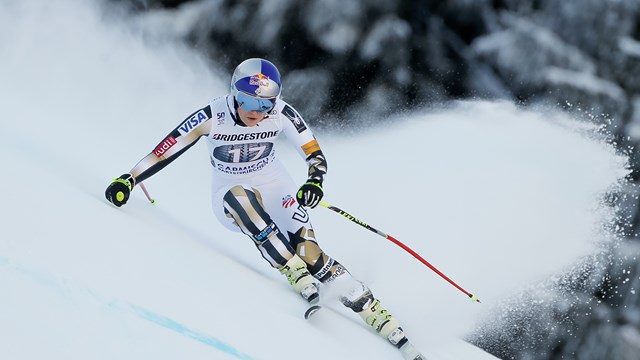 Garmisch-Partenkirchen, Germany – Lindsey Vonn is back on top.

In only her second race since returning from a pair of injuries that sidelined her for almost a year, Vonn won Saturday’s Audi FIS Ski World Cup downhill on the Kandahar course for the third time in her career. Saturday’s win marked her 77th career World Cup victory, moving her closer to the all-time mark of 86 wins set by the legendary Swede Ingemar Stenmark.

“It feels amazing,” acknowledged Vonn. “I just got to the bottom and I cried. I’m so happy that it only took me two races to get back on the top step,. Honestly, I wasn’t sure after Zauchensee how long it would take me. I proved to myself today that all the work that I put in is really coming through.”

Starting bib 17, Vonn posted the fastest times at all five intermediate splits ahead of second-place finisher Lara Gut of Switzerland, 0.15 seconds back, and third-place finisher Viktoria Rebensburg of Germany, both of whom looked on with surprising disbelief in the finish at what Vonn had just accomplished.

“I’ve worked really hard to come back and I feel like sometimes I come back so quickly that everyone forgets how much time and energy, blood, sweat and tears it takes to come back without any training and just jump in there,” said Vonn, who was 13th in her first race back last weekend in Altenmarkt- Zauchensee, Austria and  only a day after she struggled in the training run on the slope and missed what proved to be a critical gate to her success on Saturday,

Despite a small mistake at the bottom of the course, Gut was pleased with her second-place result.

“I’m pretty happy because I know I can be close to the win all the time if I ski the way I can,” Gut noted.

The German crowd was awed by Rebensburg’s return to the downhill podium for the first time in a year, since the Garmisch-Partenkirchen race last season when she also finished third.

“I knew from the training that I felt pretty well down there, but the run didn’t feel that great because I think it was faster than yesterday. So the turns were pushing way more than yesterday also. Then, I thought, I’m really down, but it was fast, I tried to keep the skis running, and yeah, I’m pretty happy about it,” Rebensburg said. “I mean it’s always so nice to be on the podium. For sure, it’s been quite a while in downhill. I think it was maybe a year last time. I don’t know. So it’s super to be up on the podium again. For sure, now we [are at the] end of January, so I think it’s a good time also to be on the podium.”

Up next, the women race super G Sunday in Garmisch-Partenkirchen.