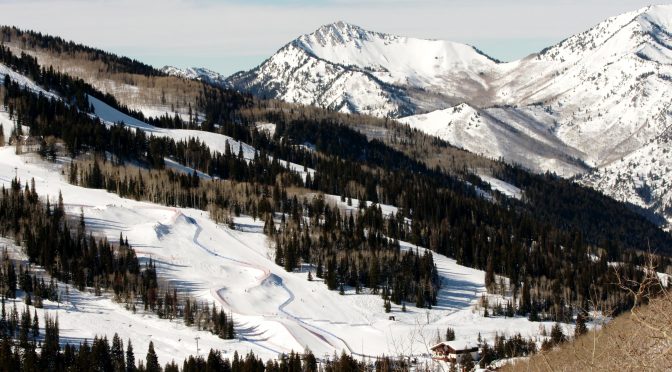 Solitude, UT – American snowboardcross athletes claimed a victory on home soil on Sunday at the Toyota U.S. Grand Prix at Solitude Mountain Resort. In Sunday’s team event, Rosie Mancari, of Anchorage, Alaska and Stowe, Vt.’s Lindsey Jacobellis took the win for the ladies, while Alex Deibold, of Boulder, Colo., and Nate Holland from Squaw Valley, Calif. combined to take third place for the men behind the Italian team featuring reigning world champion Luca Matteotti and his teammate Emanuel Perathone, and the Austrian team of Julian Lueftner and Lukas Pachner who finished second.

The snowy conditions that plagued Saturday’s individual event moved out of the Wasatch for Sunday and the course stayed relatively clear of snow overnight, which made conditions much faster for Sunday’s team event. Jacobellis and Mancari combined fast speeds and strategies to take the win for the U.S.

“Last run was fighting the whole way down,” Jacobellis said after the race. “We were all really close and I was just trying to take away lines and options and slow down the girls so that Rosie did not have to fight through the pack.”

All the U.S. athletes were happy to be in the States at Solitude, competing in a World Cup on home soil. “I can’t even really put words to (how it feels),” Mancari noted. “My mom is here watching for her first race ever so it’s really awesome. This is my first race in the U.S. that’s a World Cup, so the whole atmosphere and community is amazing. I see 100 people and they all want to give me hugs – it’s amazing.”

For the men, Deibold took the lead early on, but had a bobble down the course that left Holland fighting from behind In the men’s event that saw several wash-outs, passes and tight maneuvers, all ingredients that make snowboard cross what it is: a great show.

“I think our finish today could be pretty squarely put on my shoulders,” Deibold said of their third-place result. “Nate was definitely the fastest guy out there. I had the lead, I was trying to protect my line and I just unfortunately made a small bobble and it cost us.”

Holland did make a great effort to get the American team on the podium. “All the gates dropped, I was off the back, I just pinned it as hard as I could,” he said. “I know I’m pretty fast on this course and in these conditions I think I’m the fastest… I made a strong push, made up a lot of ground, but it wasn’t enough for the win today.”

“We tried to do better than yesterday and tried to win,” said Perathoner, who finished a disappointing 42nd in Saturday’s individual race. “Basically I had no pressure. I did very bad yesterday, and I just wanted to do it better today.”

The snowboardcross athletes will next travel to Bansko, Bulgaria for a World Cup event Feb. 2-5.