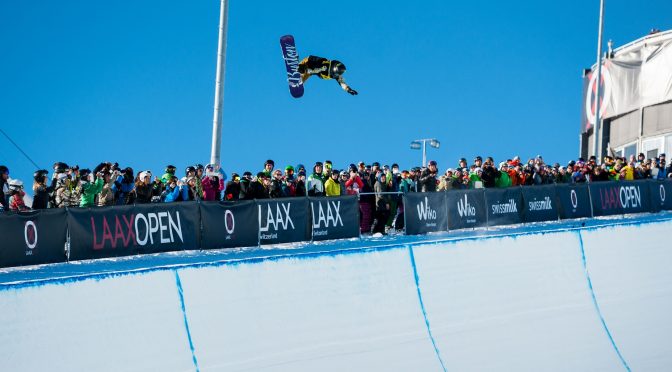 Laax, Switzerland – With perfect weather in a perfect halfpipe, American snowboarders dominated the Laax Open on Saturday, which also served as a stop on the FIS World Cup tour for the first time in 2017. Chloe Kim, of Torrance, Calif., and Idaho’s Chase Josey earned the wins for the women and men, respectively.

Laax Open 2016 winner Arielle Gold, of Steamboat Springs, Colo., was second for the ladies.  The two Americans were joined on the podium by Xuetong Cai of China, who was third.

After also winning the season opener at the Toyota U.S. Grand Prix at Copper Mountain in December, Kim made it back-to-back World Cup wins by taking top honors in Laax. She now leads the FIS halfpipe rankings, and isn’t expected to slip from the top anytime soon. Kim is absolutely dominating the competition; she used a run to win at Laax that was almost exclusively switch, featuring only one frontside spin and it was a 1080.

“I’m so stoked that I was able to put down some good runs today,” Kim said of her win at Laax. “I couldn’t be any happier.”

It was a huge win for Hailey, Idaho’s Josey, 21, who claimed his first World Cup victory with a run that included five consecutive doubles—two being back-to-back switch doubles. He received an enormous score for the run—97.75.

“My third run was just full throttle,” Josey said after the comp. “I just went for it. I gave it everything I had and I was fortunate to land it. It worked out for me today.”

Joining Josey on the podium on Saturday were Australia’s Scotty James and reigning Olympic halfpipe champion Iouri Podladtchikov of Switzerland. Having also earned a podium at the Copper Toyota U.S. Grand Prix with a third-place finish, Josey now leads the FIS points list for halfpipe.

The snowboard freestyle World Cup tour continues in Italy this week where Seiser Alm will host its first ever World Cup event with a slopestyle competition slated to take place Wednesday through Friday. However, the U.S. Snowboarding athletes are heading to Colorado for X Games Aspen, where invited riders will compete in big air, halfpipe and slopestyle Thursday through Sunday.