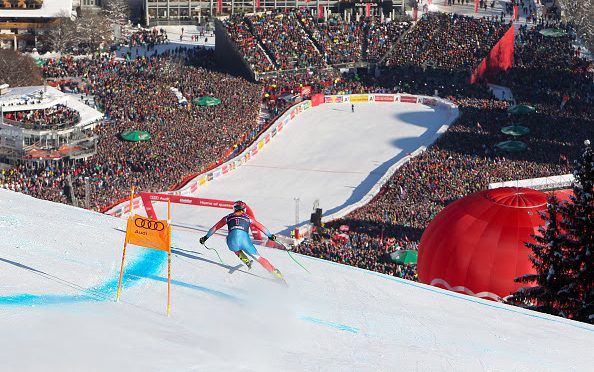 Bright sunshine allowed the race to be run in front of 50,000 fans from the very top of the course for only the eighth time since Austrian Fritz Strobl set the record time of 1:51:58 in 1997. They witnessed Paris atop the podium where he last stood in 2013.

“To win twice at the Hahnenkamm is an incredibly special and brilliant experience,” Paris said. “I was lucky today, as some of my competitors didn’t handle the Hausberg section as well as I did – that is what decided the race at the end of the day. Let’s see if we can top the party of 2013.”

On the world’s toughest downhill course, one small mistake is the difference between finishing on the podium and 10th place. Just ask Utah’s Steve Nyman, who finished 10th in a race where the top 10 were separated by just 0.84 seconds. Nyman, who chose bib 1, soaked in the start festivities and was well on his way to a great run until the Hausberg section on the world’s most famous downhill course.

“It was really cool starting No. 1,” Nyman said. “They have the big gong going up there, the countdown, and everybody is psyched to see the first guy kick out of the gate. I definitely had some nerves, but I executed really well until the Hausberg. I landed off that round, and that’s a long side-hill traverse, and not carrying the speed across that cost me a lot of time.”

Nyman led four Americans into the top 30 Saturday, including Tommy Biesemeyer of Keene, N.Y., who started bib 50 and posted a career-best 23rd place finish – scoring his first World Cup downhill points – on his first race down the Hahnenkamm.

“I’m happy to walk away with 23rd today,” Biesemeyer said. “It was my first time down Kitzbuehel. To get my first downhill points with a career-best downhill result here in Kitzbuehel is a day to remember.”

Austria’s Marcel Hirscher, who did not race Saturday, continues to lead the overall World Cup standings with 980 points. Norway’s Henrik Kristoffersen is second with 692 points and France’s Alexis Pinturault is third with 655 points. With Saturday’s victory, Paris moved atop the World Cup downhill standings by two points over the injured Aksel Lund Svindal of Norway.