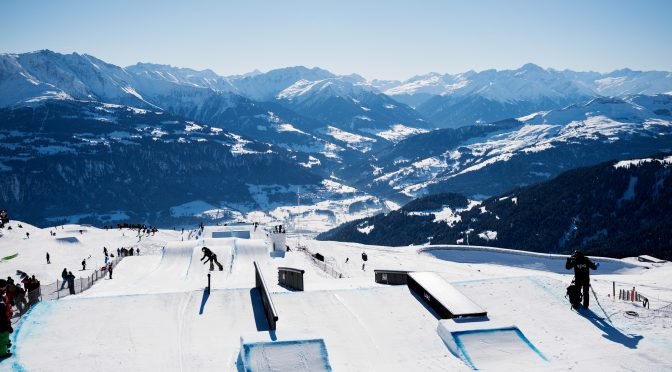 Facing superb conditions under bluebird skies on the creative 500-meter long course at Crap Sogn Gion, 26-year-old Rukajarvi, the 2014 Olympic silver medalist and first-ever FIS slopestyle world champion, dominated the semi-finals ahead of a blistering second run in the finals to secure her career’s second win in four years with a score of 84.83. Rukajarvi’s winning run consisted of a boardslide pretzel out on the rail, a switch backside 180 mute over the roller, continuing with a frontside 7 tailgrab, a backside 5 stale and a cab 7 stale on the kicker line before hitting the final jib feature.

“It feels so good to be back on top of the podium after 2010,” Rukajarvi said. “My career started here back then and I always love to return to Laax.”

Rukajarvi edged out Austrian rider Anna Gasser (83.71), who has placed on the podium in all six World Cups she competed in this season. American snowboarder Jamie Anderson, the Olympic slopestyle champion and 2016 Laax Open title holder who was ahead after the first run in the finals, rounded out the women’s podium in third with a score of 81.50.

In the men’s event, Canada Snowboard once again left its mark in the Swiss Alps. After five Canadian riders filled the top five slots in last year’s event, Team Canada swept this year’s podium, led by Max Parrot. Despite securing the win in the second run with a score of 89.00, Parrot bettered his position with a 91.58 in his final run thanks to his 50/50 to backlip on the rail, a backside rodeo 900 over the roller, followed by a cab double 12 mute, a frontside triple 1440 and a backside triple 16 mute on the kicker line, with a great finish on the jib feature.

Parrot’s run put the pressure on the last man to drop in, teammate Mark McMorris. The 2014 Sochi bronze medalist, McMorris tried to step up his game with a backside triple 16 but couldn’t land his run as cleanly as he wanted to and finally placed second (88.96) behind Parrot, who claimed his career’s fifth win and second of the season after taking the big air event at Copper Mountain, Colo. earlier this winter.

Canadian Tyler Nicholson, runner-up at last year’s Laax Open, celebrated his first slopestyle podium finish after coming in second twice in big air events in Quebec (2015 and 2016). Red Gerard of Silverthorne, Colo., who is fresh off his first World Cup podium at Kreischberg last week, finished just off the podium on Friday in fourth.