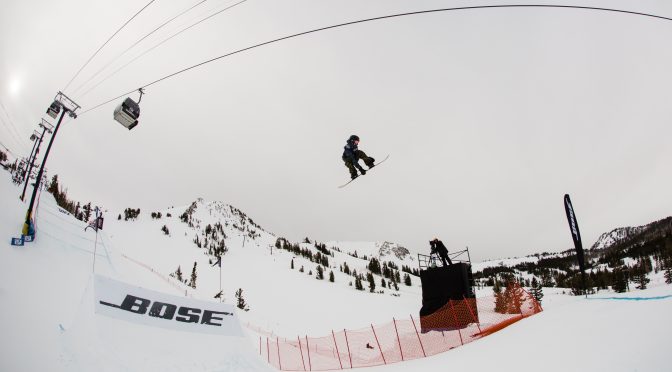 Mammoth Lakes, CA – American snowboarders turned in a stellar performance at the Toyota U.S. Grand Prix slopestyle event over the weekend, sweeping both men’s and women’s podiums in flat light conditions at Mammoth Mountain. Up-and-comer Red Gerard (Silverthorne, Colo.) topped the field to take the win for the men, while Jamie Anderson (South Lake Tahoe, Calif.) nabbed the win for the ladies.

It was Gerard’s first major victory, but he has been warming up to the top spot all season with a third-place finish at the Kreischberg World Cup and fourth-place finish at the Laax Open in January. The 16-year-old Coloradoan battled the competition as well as the weather to take the top spot. “It turned out to be fine,” he said after his first run. “Just trust your landing and trust your skills and you’re good to go.”

By contrast, Anderson is more than familiar with the top of the podium, including winning the inaugural Olympic snowboard slopestyle gold medal at Sochi in 2014. It was her third major win for the season after taking the big air win at the Copper Mountain Toyota U.S. Grand Prix and the Dew Tour championship in December.

Sunday’s slopestyle was the first Olympic qualifying event for the PyeongChang Olympics in 2018.