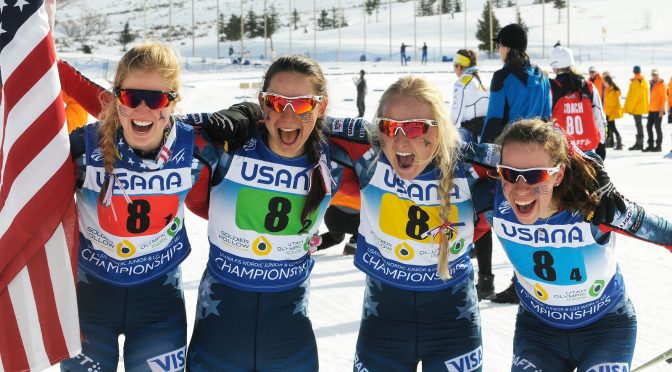 Midway, UT – This is a story about the dream of four teenaged girls. It’s a story about best friends who came from different backgrounds in sport from across America. It’s a story about inspiration and the power of sport heroes. In a way, it reads a bit like a fairytale. Except that it really did happen, just as they had dreamed.

Katharine Ogden and Julia Kern, both 19, are New England natives who cross country ski race together at Stratton Mountain School in Vermont. Hannah Halvorsen, 18, is a California girl from Truckee, skiing out of Sugar Bowl. Hailey Swirbul grew up in Carbondale, Colo. skiing with the Aspen Valley Ski & Snowboard Club before moving to Alaska.

The dream they shared was a bit different than that of most teens. Walking around the streets of the Adirondack Olympic village of Lake Placid in September, 2015, they talked about their heroes – the American girls on the World Cup tour. They envisioned themselves with USA painted on their faces and glitter on their cheeks. And then there were those crazy relay socks their heroes wore.

“We’ve just loved seeing the girls in the relay,” said Ogden. “The four of us have been really close friends for a long time. It was our dream to have the four of us on a relay team together just like the national team.”

A decade ago, the USA was not a player in international cross country ski racing. Today, seven different women have stood on World Cup podiums. And in the relay event held twice a year, the USA has now become a threat. What the U.S. women have done to achieve that level goes well beyond athletic training. It’s about team. It’s about supporting each other. It’s about dressing up for relay days to build team spirit. And it’s about winning.

So, together, the four best friends set a goal. It wasn’t just any goal. They knew the Junior World Championships was coming to America. And they knew the date when they would ski together in the relay: Sunday, Feb. 5, 2017. On that afternoon in Lake Placid nearly two years ago, they stopped in an outlet store and bought their relay socks, tucking them away until that Sunday in February. At every camp and every competition, they reminded each other of their goal.

A cross country relay is complex. The first two athletes ski classical technique, or diagonal stride. The final two ski freestyle technique, or skating. Every athlete has a role. Every athlete must perform. It doesn’t mean you have to win your leg, but each corresponding athlete needs to move the team forward.

It was not lost on Hailey Swirbul, the youngest of the team, the importance of her leadoff role. A few minutes before the start, Coach Bryan Fish talked to her on the trail. “Just ski your own race – don’t worry about anyone else,” he told her. “You’ll stay in contact.” She did her job, positioning the USA 15 seconds from the medal.

Swirbul tagged Kern for the second classic leg. Battling illness that week, Kern was not at 100 percent. But she gutted through her leg, moving the USA up two spots to sixth and kept the gap to medals at 25 seconds – still achievable with the skating prowess of Halvorsen and Ogden.

Now it was crunch time. Next up was Halvorsen who tore through the field, battling up every hill with Sweden and France. Tucking the long Cabin Downhill, Halvorsen burst between the Swedish and French girls and attacked on Horseshoe HIll to move into third. She would lose one spot coming into the stadium, but left Ogden in a viable position to seal the deal.

Ogden saw Halvorsen coming into the stadium for the tag in fourth. It was now in her hands to achieve the dream. “The podium was right there and I couldn’t not just send it,” said Ogden. As much as she wanted that medal, Ogden knew she had to be smart. She paced herself behind France, waiting for the long sustained climb on the back reaches of the 3.3k course – powering herself into medal position and building a gap that could not be overcome.

It was at that moment that life moved in slow motion. Ogden’s three teammates were in the finish anxiously watching for the racers to come into view. Suddenly, there she was, hauling down Cabin Hollow and up into Horseshoe Hill – no one behind her. At first they pinched themselves – was this a dream? Then came the reality.

“I was crying,” said Swirbul. “This has been a dream for us for more than two years. To see that dream come true – I was crying, happy, hugging and screaming – all in one emotion.”

Ogden rounded the final turn into the stadium – the bronze medal uncontested – as her friends came to greet her at the finish with American flags. It was a finish area filled with emotion – family, friends, fans who all knew how hard these four girls had worked for this one day.

Together, as teammates, they had accomplished something that had never been done before.

“This didn’t just happen organically,” said U.S. Ski Team Coach Bryan Fish. “This was a part of a plan that these four athletes have worked on for nearly two years. Today they put it together on the snow.”

And the U.S. Cross Country Ski Team athletes the four girls admire so much? They showered the juniors – who they jokingly call “guppies” – with praise. “Relay days are the BEST days, because that’s when the true strength of a team comes out! SO proud of our junior girls for taking the #relaysocks out for an exciting ride. #oneteam #guppiepower,” wrote two-time World Championship medalist Jessie Diggins. Kikkan Randall echoed the sentiment. “Looks like the relay socks worked their magic! World Junior podium for the US in relay! So proud! #oneteam #youngguns.”

“We got all our motivation from the World Cup girls,” said Kern after the big win. “They’re the ones who set the precedent and we just try to follow and make them proud.”