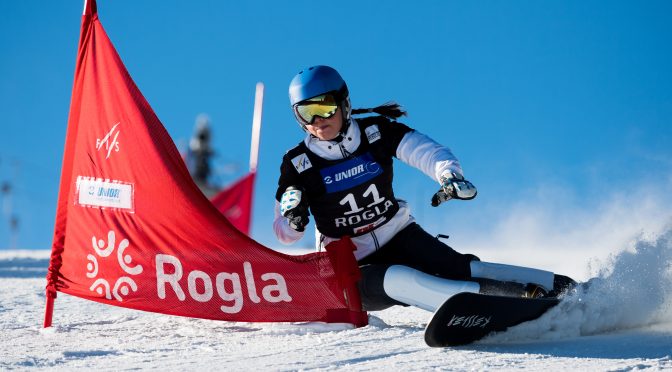 PyeongChang, South Korea – It’s been five years since the alpine snowboard World Cup tour last stopped in South Korea. Now, with the 2018 Olympic Winter Games right around the corner, it’s time for the carving specialists to once again compete in head-to-head duels on the Korean peninsula. Bokwang Phoenix Park, host of the PyeongChang snowboard events, will welcome the world’s best raceboarders for a parallel giant slalom on Sunday.

Unlike the World Cup and World Championships, the official Olympic test event will be staged in the re-run format – just like at the Olympics – which means racers have to master the course a strength-sapping ten times (two qualifier runs, and eight runs in the knock out rounds) to make it to the podium.

Riders, however, are well-prepared as 2014 Olympic PSL gold medalist Julia Dujmovits of Austria explains on behalf of the field, “That’s why I train so much over summer, to be able to compete ten times.”

Stamina, though, could make a difference. It will definitely add some spice to the race for the Crystal globe.

For the ladies, it’s a battle of four for the title right now, with Bansko winners Alena Zavarzina (RUS, 2,500) and Patrizia Kummer (SUI; 2,300) sitting in a respective first and second position. However, Austrian athletes Ina Meschik (2,120) and Dujmovits (2,040), whose point total is trending upwards, are close behind.

Over on the men’s side, Radoslav Yankov (BUL) has descended upon Bokwang with a first and second rank finish of his home soil races in Bansko, identifying him as the one to beat on the 2018 Olympic slope, especially as the World Cup leader (3,200) has a comfortable lead over his pursuers.

But if there is one rider who can handle the South Korean slopes and snow it’s Benjamin Karl. The Austrian top gun has celebrated four world championships titles thus far in his career, including gold earned in Gangwon, Korea back in 2009. The two-time Olympic medalist is back to strength after winning the World Cup opener in Italy and placing third in Bulgaria last weekend. He therefore sits in second of the PGS ranking with 2,460 points.

With Nevin Galmarini (SUI; 2,108.50) and Sylvain Dufour (FRA; 1.580), two riders from the older generation are also mixing it at the top while Sang-ho Lee (KOR) is actually racing the season of his life. The 2015 PGS junior world champion is currently ranked fifth in the PGS World Cup standings (1,560), making him the top-ranked South Korean rider of all time. And with a race on home snow, and one fourth place and two fifth-place finishes in the bag already this season already, the 21-year-old local favorite will definitely be aiming for his career’s first podium result.