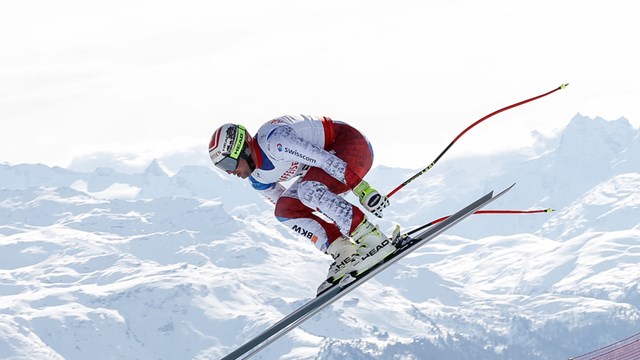 The day started out with similar weather to Saturday’s postponed downhill—a thick layer of fog hovering in the middle of the course. But as the day went on, the cloud lifted, leaving brilliant sunshine sparkling on the World Championships track. Due to the early weather, the downhill start was lowered, but that didn’t restrict the men from catching huge air off the jumps.

The race was a thriller, with the lead constantly changing hands and racers edging each other by razor-thin margins. The 50,000 fans were biting their nails as Feuz came down at each interval in the green. They had to continue to sit on the edge of their seats as several racers came close to dethroning Feuz, but ultimately could not spoil the fairy tale.

“To win this gold medal at home in front of Swiss fans, I couldn’t have asked for anything more,” said Feuz, who won the downhill and super G test events at St. Moritz during the 2015-16 season. “It was a close race today and anyone could have taken the win, but I’m really happy that it’s me to win the gold.”

It was the fifth medal of the World Championships for the host nation as the Swiss speed team has lived up to all expectations in the first five races in St. Moritz. For Feuz, it was his second World Championship medal after earning the downhill bronze in 2015 in Beaver Creek.

Guay ended these World Championships with a gold and a silver medal – a major surprise for the Canadian team, which now has three medals in St. Moritz.

“I get to walk away from these World Championships with a gold and a silver medal which is more than I could have every hoped for,” said Guay. “I’m just over the moon with how everything worked out, and I can go home very happy.”

It was Franz’s first World Championship medal and he was happy to bring home the second medal of the day after Stephanie Venier earned the ldaies’ downhill silver earlier in the day.

“Everything worked well for me today,” said Franz. “When I came down and crossed the finish and saw that I was in third, I was surprised. It’s great to take home a medal from this race.”

“I tried as hard as I could to be fast down the hill,” said Goldberg. “Having the start moved down—it was definitely a strength of mine to have the top part… Today the speed was lower and it came more into gliding. These guys are veterans and have been doing it for 10 or more years than me, so I was just trying to be as close as I could to them.”