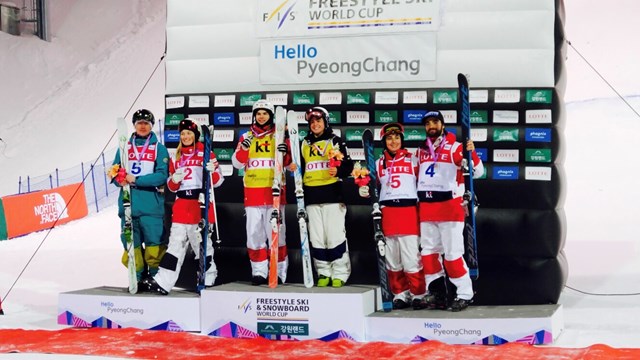 PyeongChang, South Korea – It was one of the most awaited stops on the FIS Freestyle World Cup calendar this season. One year out from the 2018 Olympic Games, mogul athletes had the opportunity this weekend to compete on the site that will be hosting the largest sporting event on the planet next year.

“I am happy with my performance tonight, but what I am most proud of is to know that I am able to ski well on this course,” said Dufour-Lapointe. On her part, Andi Naude was thrilled to have landed her back full on the first jump and to have skied on the Olympic run. “It is huge for me to have had the opportunity to ski here, and to be on the podium! I couldn’t be happier,” indicated Naude.

Jaelin Kauf, of Alta, Wyo., was the top U.S. finisher in fifth. “The course was sweet – it was so soft and fast,” said Kauf. “My top airs were big and I was able to carry my speed through the middle section. I’d like to keep trying to go bigger, go faster and make the super finals. I really enjoyed skiing here and I think this will be an awesome venue for the Olympics next year.”

On the men’s side, we had to wait until the very last minute to find out who was the big winner. The victory finally went to Mikaël Kingsbury with a slim margin of 0.01 over his closest rival, Dmitriy Reiherd of Kazakhstan. “The competition was extremely tight in the super final. I made a few small mistakes but my jumps were excellent and they allowed me to get the higher score”, explained Kingsbury. “The course is amazing, I did take a lot of notes and I will try to repeat today’s feat next year at the Games.”

Philippe Marquis finished third, thus collecting his second consecutive medal of the season. “I am really happy. This season, I have been consistent with my skiing but I simply couldn’t get to the podium. I now have two medals in a row, including the one at Deer Valley”, beamed Marquis. “Today, I managed to improve with every run to be at my best for the finals. It feels great to accomplish this here, in Pyeongchang, at the test event and under a lot of pressure.”

Kingsbury and Marquis had also finished 1-3 at the 2013 test event in Sochi.

Troy Murphy, of Bethel, Maine, was the best U.S. male skier in fifth. With no particularly difficult jumps or bumps, the Bokwang Phoenix mogul course allowed all the skiers to really push it and lay down their best runs. It also meant that, if even the smallest of mistakes was made, the judges would take note.

“With these types of courses, you have to make sure everything is looking really clean,” said Murphy. “Since it’s so easy, you can do your biggest tricks and ski fast and more naturally – it’s super fun. I switched up my air package and did a full on bottom, which for me is really consistent, big and fun to do. I thought my jumps were super solid and I’m just going to keep plugging along until I get that podium.”

This test event was an important milestone in the athletes’ preparation for the upcoming Olympic Winter Games a year from now. It is the opportunity for them, as well as for the support staff to familiarize themselves with the competition site and the environment. As Canadian men’s head coach Rob Kober explains, “It is crucial for us to be here before the Games. Once the athletes have seen the site and have had the opportunity to get a feel for the environment, there will be fewer surprises. This event is a good dress rehearsal for the Olympics.”

The course, 250 meters long and 27 degrees steep, required some work to allow the hosting of this World Cup competition. “The organizers have done a good job preparing the course. It will be somewhat different at the Olympics, like the spacing of the moguls and the rhythm of the course. Those are some of the variables that the organizers can play around with,” continued Kober.