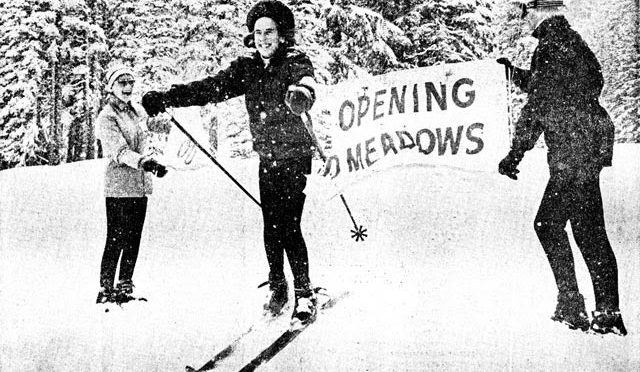 Mt. Hood, OR – Slightly over 49 years ago, Mt. Hood Meadows officially opened on January 26, 1968 with ceremonies attended by over 200 dignitaries including America’s only Olympic gold medalist Gretchen Fraser. The ski area launched with two lifts, a T-bar and a rope tow. Fraser’s inaugural run was the full 1,061 vertical drop from the top of the Blue lift, ending at the base area lodge, skiing through the grand opening ribbon. And while the run took only a few minutes, it was the culmination of an initiative that began more than two years earlier when Portland businessman Franklin G. Drake saw the U.S. Forest Service announcement requesting proposals to build a new ski area on Mt. Hood.

Drake assembled a consulting team, prepared a feasibility study and involved a handful of close friends who shared his love for outdoor recreation, forming a limited partnership to compete for the permit. In April of 1966, the U.S. Forest Service awarded the 30-year permit to Mt. Hood Meadows Oreg., Ltd. Lloyd Gilmore, supervisor of the Mt. Hood National Forest, announced that Drake’s bid was chosen, “In the belief that both the immediate and long range benefits for the using public would be better provided by the development plans of Mt. Hood Meadows Oreg., Ltd.”

Drake recognized the potential of Mt. Hood Meadows from his very first trips to the area, saying, “The proposed permit area excited my imagination with the potential for a quality regional year-around resort. The variety of the terrain, the beauty of the alpine meadows and the wide open untimbered spaces above the tree line, provided a near perfect landscape for an outstanding ski area.”

Now on the verge of its 50th anniversary season, Mt. Hood Meadows has grown to become one of the largest and most popular winter recreation areas in the Northwest. The many expansions and improvements over the years added chairlifts, lodge facilities and infrastructure to accommodate the growing population of the Portland area and demand for snow sports on Mt. Hood.

V.P. of Communications Dave Tragethon says Meadows will present a season-long celebration to honor the founders, pioneers, guests and team members who have made Meadows what it is today. “The founding of this company and its evolution has significantly enriched the lives of our guests over the years, serving the masses yet facilitating a personal experience with the nature that surrounds us. It’s a story worth telling and celebrating and that’s what we will do next season.”

A website has been launched to detail the history, list events and activities, and promote 50th anniversary deals and special offers. A Facebook Group has been established to collect and share personal stories and reflections of guests and team members.

“The story of Meadows really is the collective personal experiences of those who have visited, recreated and worked here over the years. We are looking forward to sharing that story over the next 16 months as we celebrate our 50th anniversary season,” says Tragethon.