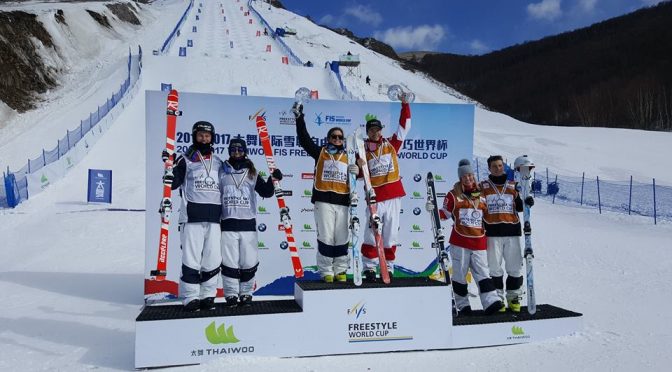 Chongli, China – Mogul skiers ended their 2016-2017 World Cup season with a final dual moguls competition on Sunday at Thaiwoo Ski Resort in China. Canada’s Mikaël Kingsbury won the dual moguls event, after also winning Saturday’s singles event. While in China, Kingsbury collected the World Cup title that he had already locked up earlier in the season.

“I am very happy about today’s win. I was pleased with my skiing yesterday, and today, my only goal was to have fun on the course. I am extremely grateful for everything that happened this season,” said Kingsbury.

Switzerland’s Marco Tade was second, followed by Brad Wilson, of Butte, Mont., rounding out the podium in third. After missing finals in the singles competition on Saturday, Wilson put it all on the line on Sunday, battling through multiple close duals and advance to the small final. He went up against Canada’s Simon Pouliot-Cavanagh for the podium and, while the two were neck and neck after the top air, Wilson stayed solid in the middle section and laid down some fast turns to ski away with the win.

“I played it a little conservative yesterday, but today I was just skiing my run and posting some of the fastest times out there,” said Wilson. “It feels good to end the season on a high note. This season was definitely a little tough for me – I had some inconsistencies in my skiing. But in the end, it was nice to put everything together and get the podium.”

Kingsbury’s back-to-back wins this weekend are his third this season, following Deer Valley, Utah and Tazawako, Japan. With this seventh consecutive victory, Kingsbury also matches his own record set last season. He now has a total of 42 career victories in addition to receiving both Crystal Globes this season.

On the ladies’ side, Australia’s Brittney Cox stormed through the tight course for her own season’s seventh victory, eliminating Tess Johnson (USA), Alex-Ann Gagnon (CAN) and Andi Naude (CAN) on her way to the big final. Once there, she put together another solid run, though her victory was essentially ensured when her French opponent Perrine Laffont – winner of Saturday’s single moguls competition – struggled to stay compact and went out of the course early after the start.

The win gave the 22-year-old Cox the World Cup season title. “I’m so excited,” she said while holding her moguls Crystal Globe, “First win at the first event in Ruka, and now another one at the last event in China to wrap up the season. I’m just so happy.”

Despite some problems in the big final, Laffont showed another amazing performance. Second place on Sunday matched her second place in the overall World Cup standing. Third place on Sunday went to Justine Dufour-Lapointe of Canada who edged out her teammate Andi Naude in ladies’ small final. Dufour-LaPointe also finished third in the overall moguls World Cup standing.

“I am mostly happy with my season, despite my drop in the general rankings. At the same time, I managed to overcome quite a few challenges, not always ski-related, and I feel that all these battles will make me even stronger for next season,” said Dufour-Lapointe. “This season isn’t exactly what I had hoped for, but it is the next one that truly matters. My third place today confirms that I am ready to take on the Olympic season and World Championships next week.”

All six Canadian women competing on Sunday made the top 10.
With this weekend’s showing, Canada has also won the coveted Nations Cup, awarded to the country with the highest number of points in the FIS overall rankings.

Thaiwoo was the last stop on the 2016-2017 FIS World Cup circuit. Athletes will now enjoy a few days off before heading to Sierra Nevada, Spain for the FIS World Championships on March 8-9.