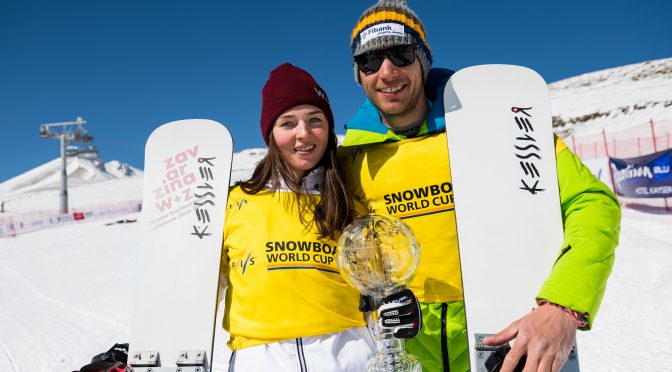 Organizers were force to postpone the race until Sunday, after thick fog enveloped the course midway through the competition on Saturday.

The competition finally resumed on Sunday with the quarter finals under a blue bird sky with the reigning PSL world champion underlining her claim on another gold medal at the upcoming world championships which will take place in Sierra Nevada, Spain, March 7 to 19. In a close women’s final, Ledecka edged out Japan’s Tomoka Takeuchi by a mere 0.03 secondsto claim her career’s ninth victory.

“It was a great race, although yesterday was pretty tough. But that’s nature,” said Ledecka. “But his way, it was interesting with the race taking place on two different days. It was a new experience. I happy that I have another good result. It was a good training for Sierra Nevada. I’m looking forward to competing at the world championships.”

“The delay yesterday and re-scheduling of the race was very stressful for me as I was going for the Crystal Globe and didn’t have much of an advantage [on Patrizia Kummer],” acknowledged Zavarzina. “This waiting situation was nerve-wracking. It was like the worst day of my life. I tried to make the best of the situation but almost puked this morning after breakfast. But I kept going. It was dramatic, I was hoping to finish on the podium in the last race. I was waiting for this moment, and of course I’m happy and very proud. It was my goal ever since I started my career. It definitely took away the stress prior to the World Champs.”

In the men’s event, Sang-ho Lee and Bo-gun Choi secured South Korea’s first medals ever in an alpine snowboard World Cup event, finishing a respective second and third behind Prommegger, who celebrated a back-to-back win after his victory in the Olympic test event in South Korea three weeks ago.

“It’s been two pretty tough days. They tried to finish the race yesterday but it wasn’t possible due to the sleet,” Prommegger commented. “But yeah, I’m really happy. I won here last year, and I was able to pull of this feat again. It was pretty close but I’m very relieved. Of course, the focus is on the World Champs now but the overall World Cup ranking is also one thing I’m going for.”

With his 15th career win, Prommegger took over the lead in the parallel overall World Cup standings from Radoslav Yankov of Bulgaria, who finished 17th on Sunday but claimed the PGS World Cup title.

The alpine snowboard World Cup tour will wrap up with the final parallel slalom and a parallel slalom team event slated to take place in Winterberg, Germany, from March 17 to 19. Before then, however, the 12th FIS Snowboard World Championships are next up for the raceboarders with the PGS medal decisions scheduled for March 14 and PSL on March 15 in Sierra Nevada.