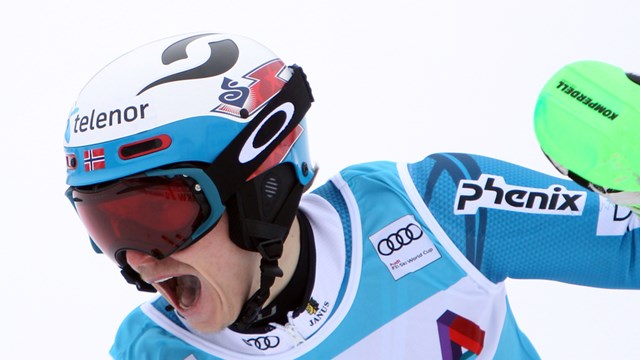 The conditions didn’t seem to intimidate Kristoffersen, who built a huge lead second run to take the win by a commanding 1.83 seconds. Manfred Moelgg of Italy was second, while Marcel Hirscher of Austria was third.

“This was really good. This was really cool,” said Kristoffersen. “I had a bit of luck with the light in the first run, but I don’t think I had luck with the skiing. In the second run, even though it was tough, I still did really good. Today was an awesome day for sure. I don’t think you can expect the same as last year, last year was pretty outstanding but I hope I can ski good, keep skiing the way I did today; as long as I can do that, I’m happy.”

After cleaning the hill from approximately 10 cm of fresh snow in the morning, the course crew was rewarded with a brief moment of sunshine, which quickly disappeared behind a dense fog right after the beginning of the race. David Chodounsky (Crested Butte, Colo.) was the best U.S. racer of the day, taking 12th place through the tough conditions. Michael Ankeny (Deephaven, Minn.) and Mark Engel (Truckee, Calif.) grabbed top-30 spots to score points.

Chodousnky was eighth after first run, but had a tough second run with fog and ruts. “I’m actually a little bit disappointed with today, even though it’s my best result of the season,” said Chodounsky. “I’ll take it, but I left a lot out there … You gotta fight and earn everything on the World Cup. It’s not given to you at all.”

Ankeny, who had scored his first World Cup points at Adelboden last season, was excited about making the points, taking 23rd place. But he’s looking for more this season, and knows he can put two runs down to achieve a better result. “I’m super excited to get back in the points,” said Ankeny. “I had kind of a tough December with some injuries to my hip, but came back after the new year super refreshed and ready to go. I think seeing that my teammates Mark Engel and AJ Ginnis pop it in there, really helped me – because we’re all really close in training and so it makes it really feasible.”

Earlier this week, Engel skied from bib 45 to third place in the first run of the Zagreb night slalom. While he crashed second run, Engel got a glimpse of the top and is continuing to attack. “I’m pretty stoked to make it down two runs in a row, but I’m still unsatisfied,” said Engel, who finished 24th and scored his first World Cup points. “I think that I can do better than that. I wasn’t holding back to finish, but this hill is really steep and I’m a lot more comfortable on flats. It was just a little intimidating, but I was trying to go full gas.”

The men’s teams now head to Wengen for an alpine combined, downhill and slalom this week.