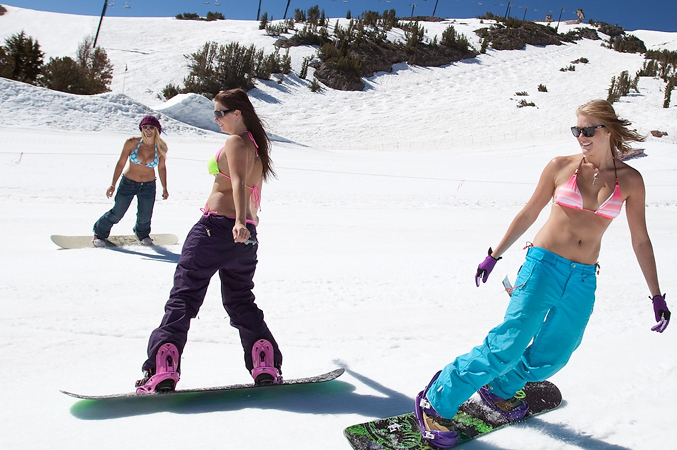 Kiltarlity, Scotland, UK –Even with the Southern Hemisphere’s 2011 winter season now getting underway there are a number of ski resorts still offering July skiing and snowboarding in the Northern Hemisphere, including ten in the western U.S. alone.

Worldwide, the choice of open ski resorts is well into the triple figures again with 30 ski areas still open in seven Northern Hemisphere countries joining those open in the Southern Hemisphere for the start of July. It’s as yet unclear how many U.S. resorts will remain open beyond July 4th but it’s possible that Mammoth Mountain in California and Crystal Mountain in Washington State will decide to do so.

Officials at Crystal have previously said that their resort, open this July 4th weekend for only the second time in its history, will stay open at weekends so long as the snow lasts and it’s currently still more than six feet deep.  “Over 600 inches of snow has fallen since Crystal opened November 19, 2010, breaking the previous snowfall record of 598 inches,” explains resort spokesperson Justin Hyatt. “Set in 1999, that record season was the only other time the slopes were open on July 4.”

Others which have not yet confirmed a closing date include Arapahoe Basin in Colorado and Snowbird in Utah, although the latter has tentatively set this Monday, July 4th for its last hurrah. Lift tickets to ski Snowbird this Friday through Monday will be reduced to $49 and limited edition t-shirts proclaiming “I skied Snowbird July 4th” will be available for $10.

Timberline in Oregon will be open daily through July and August as it does every year.  California ski resorts re-opening for Independence Day weekend only include Alpine Meadows, Donner Ski Ranch, Kirkwood, Squaw Valley and Sugar Bowl, the latter for season passholders only. Donner Ski Ranch will reopen for the weekend of July 9-10 as well. In Oregon, Mt. Bachelor near Bend will also reopen for the Independence Day holiday weekend.

In Canada, Mount Washington on Vancouver island is open for the first weekend of July only to celebrate Canada Day, the first time the resort has ever opened in July.  The Blackcomb Glacier at Whistler is open longer, through to July 24 from noon to 3 p.m. daily for the general public following morning sessions restricted to freestyle and race camps. While rumors were floated initially that Sunshine Village in Alberta would reopen this weekend as well, resort officials decided that with gondola renovations underway doing so would be impractical.

There are about a dozen glacier ski areas open in Europe through July.  The past few weeks have been hot in the Alps and in some cases snow depths on the glaciers have been dropping at the rate of 30cm a week, but most still have adequate snow depths to see them through.

Austria has more spring, summer and autumn glacier ski areas than any other country but only three are likely to be open for some or all of July.  They include Tux, which tries to open every day of the year and currently has a two-meter base and more than 20km of piste open, as well as the Dachstein and Kitzsteinhorn (above Kaprun) glaciers.

All three French summer glacier areas re-opened last month and Les 2 Alpes and Tignes will be open through July, conditions permitting.  Val d’Isere, however, calls it a season on 2011 summer skiing on July 17th.

Italy also has a choice of three centers open.  Val Senales re-opened last month to join Passo Stelvio, and now Cervinia on the Italian side of the Matterhorn is open for summer skiing, extending the area available all year from Zermatt and offering cross-border summer skiing.

The year-round snow slopes of Zermatt have been the only Swiss destination for skiers and boarders through June, and the snow is currently lying a meter thick there. A second Swiss ski choice re-opens on July 9th when its neighbor Saas Fee begins its 10-month season that lasts through to May 2012, starting with some major events planned for its terrain park.

In Scandinavia, Norway is where to go with its three summer ski resorts open and currently boasting the world’s greatest snow depths.  Folgefonn has over 7 meters (23 feet) of snow base depth, and Stryn and Galdhoppigen both have over three meters.

Turning to the Southern Hemisphere, Australia got off with a great start to winter 2011 with record early openings in May followed by healthy snowfall for planned opening weekends in early June, with more snow falling later in the month.  Cover in Australia is always a little problematic but so far it’s looking good for July at most resorts.

New Zealand had an unusually warm May and June and resorts that were due to have opened weeks ago got off to a slow start, but as we begin July Mt. Hutt and Turoa have limited terrain open and The Remarkables and Whakapapa will open this weekend. It’s snowing at last in New Zealand, if only in limited amounts, so hopefully July will be a bumper month.

South Africa’s Tiffindfell ski area is out of action this winter as ownership of the resort is auctioned off, but Afriski in Lesotho got off to an on-time start to winter last month and currently has a kilometer-long trail open plus a terrain park with a mix of machine made and natural snow cover.

In South America the Puyehue volcano erupted close to the continent’s largest ski resort in terms of uplift – Catedral – but a greater problem has been a lack of early season snow, which the resort says is why it delayed its scheduled opening last week.  It has recently been snowing there and at another major Argentinian resort, Las Leñas, which also delayed opening, and they now both hope to open in early July.

It’s been a rough start too in Chile but resorts are opening, initially with limited terrain but with hopes that conditions will improve dramatically during early July.  Valle Nevado has delayed opening until early July and Portillo, although 30% open, has stopped selling lift tickets until conditions improve.  Currently snow depths there range from 30 to 60cm.