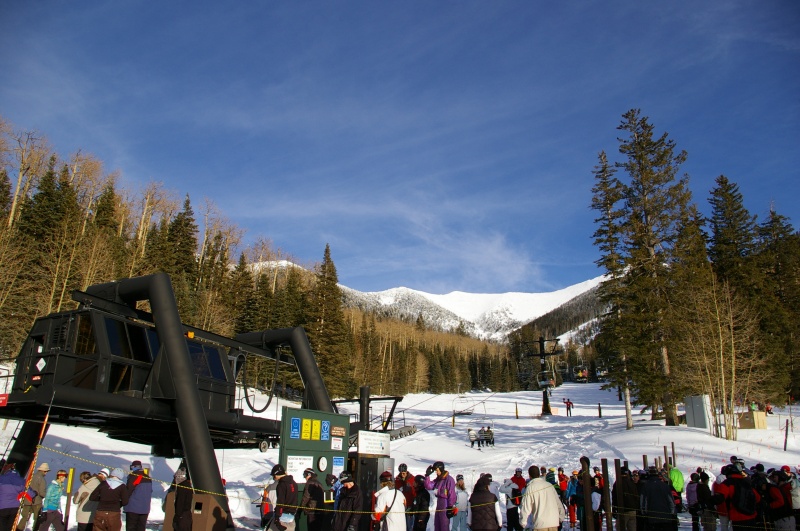 Flagstaff, AZ – Logging has begun in Arizona’s San Francisco Peaks to clear the way for a new ski lift and new runs at Arizona Snowbowl.

In accordance with plans approved by the U.S. Forest Service, the logging of the spruce and fir trees began in late June, primarily on Humphreys Peak and in the Hart Prairie area but also in the area of the Upper Volcano ski trail. A 450-foot conveyor lift will this fall replace a 150-version previously installed on Hart Prairie. Contractors may also begin laying pipe this summer to supply the new snowmaking system opposed by a consortium of Native American tribes, who consider the land sacred. Snowmaking may reach the ski area for the first time by the 2012-13 winter season.

Construction has begun paid by cash, as the ski area is reluctant to take out loans until litigation regarding the ski area improvements, which has again reached the 9th U.S. Circuit Court of Appeals, is resolved.

The plan to install snowmaking at Arizona Snowbowl has followed a convoluted route spanning more than a decade. Snowfall at the ski area is subject to volatile annual fluctuations, and owner Eric Borowsky contends that snowmaking is essential to the resort’s survival. But water for snowmaking is a scarce commodity in northern Arizona, so Borowsky arranged to buy treated wastewater from the city of Flagstaff to fuel a snowmaking system.

After several years of proceedings, the U.S. Forest Service, upon whose land Arizona Snowbowl operates, approved an expansion of the ski area to include using treated wastewater for snowmaking, a plan deemed environmentally sound by the Arizona Department of Environmental Quality, the state agency specifically vested with the authority and responsibility to analyze water safety issue. Opponents to the plan, including the Hopi, Navajo, Havasupai, Hualapai, Yavapai Apache and White Mountain Apache tribes, backed by the Sierra Club and the Center for Biological Diversity, filed suit against the U.S. Forest Service under the Religious Freedom Restoration Act (RFRA), the National Environmental Protection Act, and the National Historic Preservation Act in an attempt to stop their approval. The tribes alleged that using treated wastewater “contaminated” the San Francisco Peaks, undermining the tribes’ spiritual connection to the mountain. The White Mountain Apaches operate a competing Arizona ski area, Sunrise Park Resort.

A federal judge first decided in favor of the plaintiffs before a three-judge panel of the Ninth Circuit overturned that decision in December 2007. Arizona Snowbowl asked for a review by the entire 12-judge Ninth Circuit Court, which in August 2008 held that the tribes failed to establish a RFRA violation, because the presence of recycled wastewater on the ski area would not coerce the tribes to act contrary to their religious beliefs, nor would it condition a benefit upon conduct that would violate their religious beliefs. The full Court of Appeals determined that the three-judge panel’s erroneous RFRA analysis radically limited the government’s ability to manage millions of acres of federally-owned land considered sacred by some Native American religious practitioners.

After the U.S. Supreme Court in June 2009 refused to review the ruling issued by the Ninth U.S. Circuit Court of Appeals, the Save Our Peaks Coalition and nine individuals filed a second lawsuit asserting that the federal government did not adequately consider whether reclaimed water was safe for snowmaking if the snow were to be ingested.

In December 2010, U.S. Federal Judge Mary Murguia ruled that the U.S. Forest Service did, in fact, adequately consider the safety of using reclaimed water, and that the Plaintiffs waited too long to file their case.

“As the Forest Service makes clear, the scientific data regarding the health effects of human exposure to reclaimed water is uncertain, with some studies suggesting that certain compounds in the water do have potential for some health impact and others indicating there is no impact on human health,” Marguia wrote. In her decision, Marguia also dismissed the Plaintiffs’ assertion that successive legal challenges to the plan could be filed until the project’s final permit is issued.

Murguia’s December 2010 decision is the matter currently before the 9th Circuit Court of Appeals.