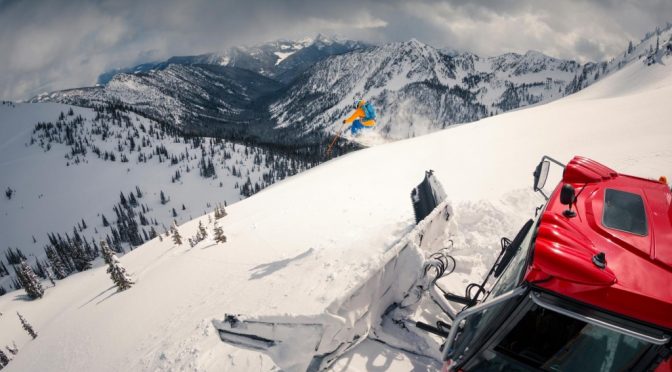 Salt Lake City, UT – If you want to ski untracked powder without any competition, and without shelling out for a helicopter or sweating on touring skis, cat skiing could be just what you’re looking for! This guide will walk you through everything you should consider when planning your trip.

Snowcat skiing might seem an odd name for an activity for true powder hounds, but these powerful tracked vehicles are one of the most effective modes of mountain transport. Despite the moniker “poor man’s heliskiing,” in the pursuit of powder they have a number of unique advantages over helicopters, and can be a golden ticket to some of the best descents of your life.

Unlike helicopters, snowcats don’t have down days. When the snow is falling too hard for the heli ops to fly, and guests are stuck in the lodge all day, lucky cat skiers will be happy as pigs in the proverbial, riding deep in the woods, gorging on faceshots and powdery pillows to their heart’s content. Cat skiing is also more environmentally friendly than heliskiing, tends to be much more chilled out (it can take 15-20 minutes to ride back up to your next line rather than a two to three-minute flight, so there’s plenty of time to blast some music and munch a few snacks), and is much cheaper – often half the price or less of a day in a bird.

Lets take a look at some of the factors you should consider when planning a cat skiing trip.

Where can you go cat skiing?

British Columbia is the real home of cat skiing; it’s where it all began, and where you’ll find the greatest concentration of operators. Mountain ranges in western Canada including the Monashees, Selkirks and Kootenays are such perfect playgrounds that they might almost have been designed for cat skiing. The snow is consistently deep, but also dry and light; the trees are perfectly spaced with lots of natural features to play with; and the terrain is as steep or mellow as you want.

However, you can go cat skiing in locations around the world, from Japan to South America (in our summers). In particular there are some exciting new destinations in such exotic countries as Macedonia, Russia and Georgia. As well as being more adventurous, they are often cheaper and have even less competition for fresh tracks.

What sort of terrain can you ride, and is it safe?

Cat skiing is generally associated with tree skiing, but most operators also have a good selection of alpine terrain, too. Unlike a helicopter, snowcats need well maintained “roads” or tracks to get around, so don’t expect to be able to simply point out a peak you like the look of. What’s up for grabs depends on the individual operator you choose, but all have an excellent range of terrain to choose from in different conditions – alpine when the sun shines, and trees when the snow falls.

Cat ski guiding is one of the most in-demand jobs in the ski industry, so the guides tend to be some of the best in the business. However, it’s always worth checking which qualifications the guides have before you book, as there are some cowboys out there! Normally you’ll have at least two guides to a group – one to lead, and one at the tail to bring up the rear and pick up any pieces. Each day they will make a judgement on what terrain is safe to ride given the avalanche conditions, but will factor in group preferences as much as possible.

When is the best time to go?

Generally you can find good conditions for cat skiing for most of the northern hemisphere winter, but the best time varies for each destination. February and early March is considered prime time for B.C.: the terrain has filled in, the snow is deep but still cold and dry, and there is plenty of daylight. However, January is often great for storm skiing in the trees, while the more stable snow later in the season can be better if you hope to ride more alpine terrain.

Japan is typically best from mid-January to mid-February, while Siberia can be great from October onwards. Macedonia and Montenegro are best in mid-winter, while Georgia enjoys a long season with great snow well into spring. Alaska tends to be better from mid-March onwards when you have more daylight to play with. During the Southern Hemisphere winter, Chile is often at its best from mid-July through August.

How good do you need to be to go cat skiing?

Many people assume heli and cat skiing are more “extreme” than resort skiing, but this often isn’t the case. You need to be able to ski ungroomed and deep snow all day long on moderate pitches (think red to black pistes in Europe, or blues to blacks in North America) and comfortable skiing in the trees. Don’t expect charging 50-degree slopes and hucking huge cliffs all day!

Most advanced intermediates should therefore be able to enjoy cat skiing. The snow is often much easier to ski than the sort of powder you find in resorts – it’s like hero snow: dry, light, untracked and forgiving. It feels like it cushions every move, and gives you a split second extra to correct any mistakes and find your balance again. Just don’t forget to bring fat powder skis, or you’ll be left behind!

If you do want to ride genuinely challenging terrain, then you should try and bring enough people of the same level to fill a cat or make a group. The guides will always try to find matching your abilities and aspirations as long as conditions are safe to do so, but it’s quite rare in open groups that everyone will be looking for high level terrain.

Where do you stay?

Most cat ski operators running multi day trips have the own accommodation or lodges, the standard of which runs the whole gamut from budget to total luxury. Some of the lodges are incredibly sumptuous, particularly in B.C. — after a long day in the hill, you can look forward to the full fine dining experience and high-end spa facilities. After all, you need to make sure you recover fully before the next day’s powder pillaging!

One thing to bear in mind, particularly if you have time constraints, is how remote the lodge is and how long it will take you to travel there. Some are fairly straightforward to reach and relatively close to an airport, while others require a long drive or are accessed only via helicopter.

How much skiing do you get and what packages are available?

How much you ski depends on how fit and fast a skier you and your group are – you might get anywhere between eight and 15 runs a day, of varying lengths and in all sorts of terrain.

The different cat ski packages available are hugely varied, and it’s beyond the scope of this article to cover them all. If you and a group of hard charging friends want to travel together and ride challenging terrain all day, then you may be better off booking one snowcat as a private group. Conversely, if you’re traveling alone and want a more relaxed vibe, an open group may be more suitable. It’s best to talk to an expert to work out what you really want from your trip, and which packages best suit that.

In terms of cost, the more opulent B.C. lodges tend to be the most expensive, while Macedonia and Montenegro and more budget friendly.