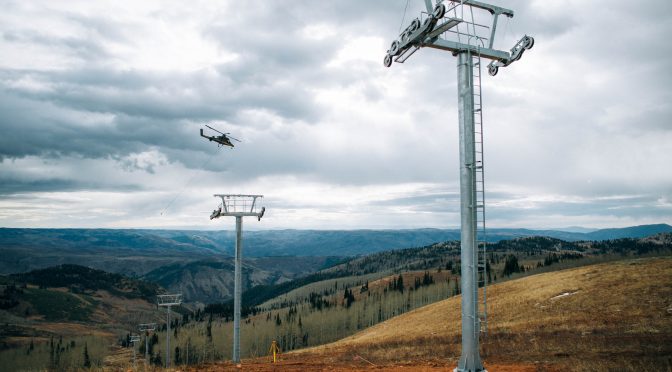 Eden, UT – “Biggest.” Now, there’s a word that fosters divergent definitions, if there ever was one. How do you define the “biggest” ski resort? Do you do it by the overall vertical drop, by the number of lifts, by total acreage, or by perhaps some other metric?

If you go by total acreage, Utah’s Powder Mountain was the largest ski resort in the U.S. until Park City and The Canyons combined last season. This winter, Pow Mow is installing two new lifts to reclaim the title, bringing total lift-accessible terrain to an astounding 7,957 acres, or 8,464 acres if you include the resort’s cat skiing areas. Powder Mountain officials claim that by adding over 1,000 acres this winter, they’ve embarked upon the largest lift-serviced ski terrain expansion in North American history (they squeaked past Red Mountain, B.C.’s 2013-14 expansion by an estimated 60 acres).

The new Mary’s Bowl and Village lifts will ascend either side of Pow Mow’s planned town development, perched on a mountaintop to the east of the resort’s existing Hidden Lake Lodge. After Powder Mountain was purchased by Summit Powder Mountain in 2013, plans were drafted to create a new village at 8,600 feet, modeled after the Swiss ski town of Wengen and similar in size to the historic portions of Aspen or Telluride. It’s envisioned to include a main street with pop-up stores, micro-apartments, farm-to-table restaurants, yoga boot-camps, public art, media labs and educational outlets offering training in everything from transcendental meditation to software development and athletic performance, all with views that stretch across high alpine meadows to the Ogden Valley and the Great Salt Lake beyond.

To bring the town site into the Powder Mountain fold, Utah-based lift manufacturer SkyTrac is currently installing new fixed-grip quad chairlifts in Lefty’s Canyon and Mary’s Bowl, with a scheduled completion in mid-December. The two new lifts will access an estimated 1,060 acres of new terrain for the 2016-17 winter season, with the Mary’s Lift at 3,880 feet long and rising 867 vertical feet, and the Village lift at 3,680 feet long and 582 vertical feet. The slopes accessible from these two lifts range in aspect from southeast, around through south-facing to southwest. They are located immediately to the east of Powder Mountain’s “Powder Country” bus-served runs, and were previously part of the resort’s all-day snowcat offerings.

Powder Mountain has also announced the capping of adult season passes and day tickets beginning this season, enabling a skier density less than 10% of what is found at comparably sized resorts.

“We strive to maintain the uncrowded, wide open, adventurous experience Pow Mow is known for.  By adding two new lifts and over 1,000 acres of new lift accessible terrain, capping ticket sales at 2,000 per day and establishing a limit of 1,000 adult season pass holders annually, we aim to keep our skier density of one acre per skier. Compare that with some of the largest resorts in the region who routinely see skier densities in excess of 14 skiers per acre, it is easy to see that we are truly committed to preserving the pow,” said Mark Schroetel, General Manager of Powder Mountain Resort. “With an advanced full price lift ticket price of $79, we truly offer all the terrain of the largest resorts in the country at half the price and a fraction of the crowd.”