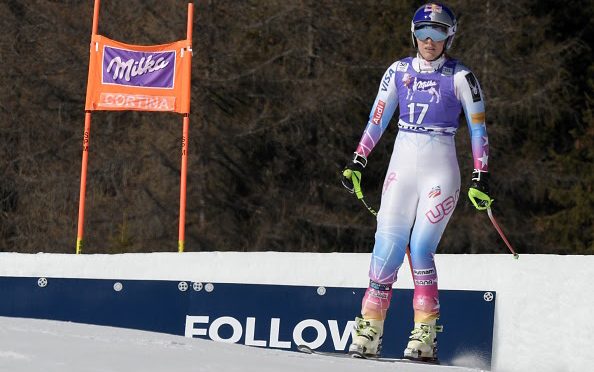 Cortina d’Ampezzo, Italy – Switzerland’s Lara Gut won her seventh World Cup downhill race on Saturday in Cortina. Italy’s Sofia Goggia was second, followed by World Cup downhill leader Ilka Stuhec of Slovenia in third. Lindsey Vonn, of Vail, Colo., was shooting for her 78th World Cup victory, and was leading at the first interval until she crashed into the nets – the same section she crashed in Friday’s training run.

“I thought I was skiing well,” Vonn said. “I thought I had a good plan going into today. They shaved down that bump a little bit, but I still managed to catch some air. I felt like I was going pretty fast … so I slowed myself down. When I landed, there was a little bit of a bump and my outside ski caught. I did the splits and went straight into the fence.”

“I’m really excited with how things have been going,” Johnson said. “I couldn’t have expected this much this often, but I’ve just been trying to follow my plan and execute it everywhere I go.”

“I’ve had a series of pretty bad results,” Cook said. “A lot of hard hills for me, so I wasn’t expecting to win, but just trying to everyday throw down a race and come down to the finish. I was owning last place for a couple series there … so today I was just staying focused and trying to find some speed, speed, speed wherever I could. Just sending it.”

With her victory, Gut pulled to within 30 points of Mikaela Shiffrin’s overall World Cup Lead. Shiffrin, Gut and Vonn are all expected to race in Sunday’s super G.

“I’m just to look forward to tomorrow,” Vonn said of Sunday’s super G. “Try to regroup, try to loosen myself up – I’m getting a little sore. I’m too old to be hitting the fence that hard.”