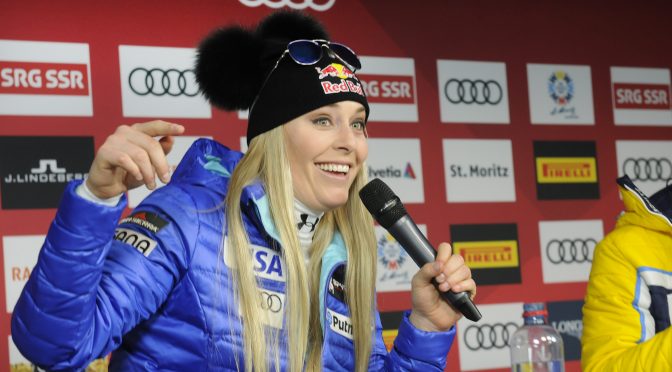 St. Moritz, Switzerland – Lindsey Vonn stood at the top of Engiadina looking out at the expanse of Swiss alpine peaks in every direction. It was a scenario she had been a part of many times before – her seventh World Championships. Now 32 years old, the then Lindsey Kildow was just 17 when she pushed into the same start for her very first European World Cup downhill at St. Moritz in 2001. She finished 57th out of 64 starters that day.

Like any pro sports athlete, if you’re a ski racer you play through the pain. You don’t win 77 World Cups without some agony of defeat. One of life’s best measurements as a ski racer is how you come back from adversity.

This comeback had been tough for Lindsey Vonn. A broken arm and resultant nerve damage in her right hand had taken its toll. Sure, there was that moment of glory in Garmisch-Partenkirchen, Germany last month when she tamed the Kandahar. But, then there was the agony of Cortina – one of her favorite courses – where she failed to come away with a win, uncharacteristically having skis slide out from under her two days in a row and into the nets.

In the World Championship super G five days earlier, she lost grip on her right pole on the bumpy track while in the lead. She fought valiantly to regain it, but lost focus momentarily, went too straight into a gate and skied out of the course.

In the alpine combined, a tough start number worked against her in the downhill. And with limited slalom training, few gave her a chance. But she gutted her way to fifth – a personal gold medal in building confidence.

Few elite athletes have competed in as many World Championships as Lindsey Vonn. She was just 20 when she climbed into the start gate at Santa Caterina, Italy in 2005 for her first Worlds. Two years earlier, at 18, she had been overlooked for the 2003 St. Moritz World Championships team despite a strong showing a year earlier in her Olympic debut.

In 2005, she learned about the bitter disappointment that comes with any elite athletic career: fourth in the downhill, fourth in the combined – a small step in time, but a giant step from the podium. It made her stronger.

Two years later in Åre, Sweden, she won silver in downhill and super G behind home country favorite Anja Paerson. Since then, nearly every two years Lindsey Vonn has won a speed medal at World Championship – including a golden sweep at Val d’Isere in 2009. But the one exception came in 2013, as an opening day super G crash stole much of the next two seasons from her career. It made her stronger.

At the team meeting the night before the downhill, weather forecasts called for overcast and flat light. But the day dawned bluebird with powerful light illuminating the nuances of the course. After fumbling with her pole in the super G, she went with a different Leki pole and a thinner glove to make it easier to grip.

As the time ticked down in the start house, her serviceman Heinzi wrapped her hand and pole tightly together with duct tape. No room for error in a sport where hundies count.

She looked down on the treeless Engiadina downhill – a rock and rolling run that had not been overly kind to Vonn in the past. She had just one win there – a huge 1.42 second margin over friend and rival Maria Hoefl-Riesch in 2012. But just two years ago in the St. Moritz World Championships test event, Vonn was well off the pace.

As her start number 9 approached, all the pre-race favorites were in. Slovenia’s rising superstar Ilka Stuhec was in the lead – no surprise. Austria’s Stephanie Venier stood in silver with Italy’s Sofia Goggia bronze – a final gate error stealing sure gold.

There wasn’t much room for Vonn.

She thought to herself about the work she had put in and the confidence she had built in just one month – one single month – back racing against the best in the world.

In the shadow of the towering Piz Nair, Vonn pushed out and down the steep pitch of the Britannia start. The course kicked her this way and that as she set the edges of her Head skis into the ice at over 60 mph. One by one the intermediate lights flashed red. But the time told the story. The medal was hers.

Great athletic champions like Lindsey Vonn make their careers on gold – not silver or bronze. Sunday in St. Moritz was different. But every bit as meaningful.

“I’ve struggled with my confidence, but I fought back,” said Vonn.

“This bronze medal feels as good as gold to me.”