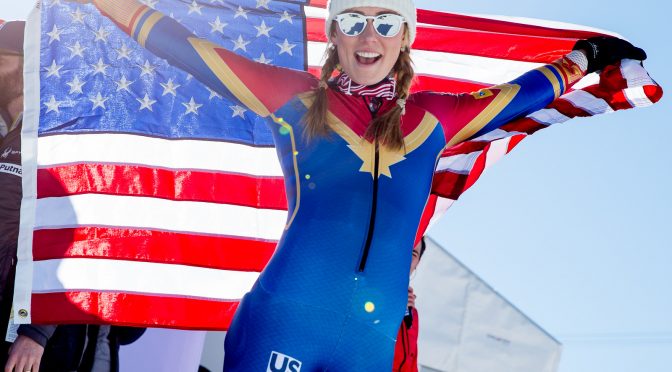 St. Moritz, Switzerland – The 19-year-old German ski racer gave a tug on the laces of her leather boots, clicking them into the cables on her long wooden skis. Behind her was the towering Piz Nair, the iconic peak on Corviglia at St. Moritz, high in the Swiss Alps.

A day earlier she had won silver in the downhill on Piz Nair – five minutes, 38 seconds down the mountain. It was the first medal of her young career. Now it was time for slalom, as she placed her bamboo poles into the snow and pushed out onto the course.

Christl Cranz was the first great superstar of women’s alpine ski racing – a new sport in the 1930s, making its Olympic debut in 1936. Belgium born, her family moved to Germany after World War I when she was just a child. She was skiing by six and took to it with a passion, eventually winning a dozen world titles and her sport’s first Olympic gold at Garmisch-Partenkirchen, Germany in 1936.

Among her accomplishments were three straight World Championship slalom titles from 1937-39 – a feat never matched in 78 years. That is, until last week in St. Moritz when young Mikaela Shiffrin dominated the day to win her third straight gold.

There’s a reason no one had matched the record of Christl Cranz. It’s tough! The intensity of competition three quarters of a century later makes it more difficult than ever to stay on top.

As the second run approached on Saturday, Shiffrin sat in the snow atop the slalom hill on Suvretta. An umbrella provided shade for her as the sun baked the snow. Her physical therapist piled snow atop her boots to keep the plastic hard and responsive for the race just minutes ahead.

Shiffrin came to slalom day with a different look about her – hair braided into two pigtails, reminiscent of one of her slalom ski racing heroes Janica Kostelic of Croatia, who won the World Championship slalom in 2003 at St. Moritz. The two braids had brought her out of a funk two years ago when she had a slow start to the season before finally winning in Kuhtai, Austria on the eve of the World Championships at Vail/Beaver Creek.

While Shiffrin had a first run lead, the race is never over until the final gate. Swiss Wendy Holdener was only .39 back. Any simple mistake could spell the difference. Holdener would run 29th, Shiffrin 30th. And Holdener put down a strong run.

Now it was Mikaela’s date with destiny.

“I tried to pretend like it was a new race completely,” she said. “When I was in the start gate, nothing like that was on my mind. It was just, ‘now it’s time to go.'”

As an 18-year-old four years ago in Schladming, Austria, Shiffrin broke through to win her first gold by .22 over home country favorite Michaela Kirchgasser. Two years ago, she withstood the pressure of a hometown World Championships to repeat the title by .34 over Sweden’s Frida Hansdotter. In St. Moritz, Holdener had now put down the gauntlet with a solid run that ignited the hometown crowd.

Slalom is about subtleties. When you watch Mikaela Shiffrin ski, you may not even notice it – the direction, the precision, the comfort in her skiing, her confidence. But it plays out quickly in the timing splits.

Split by split, the light went green. Despite being 30 racers into a softening race course, Shiffrin continued to build her lead. And coaches knew the best was yet to come. In the first run, her entire lead was captured on the flat bottom split. And she did it again on the second run, crossing the line 1.64 seconds ahead of Holdener – an unimaginable margin.

Shiffrin is too early in her career to think much about records. “It’s a lot to think about – it’s a long time ago,” she said in response to tying the record. “It’s difficult to perform so well in big events three consecutive times. It’s not easy and I can understand why people haven’t done it.

“But my team around me is really great. My coaches are amazing and we’ve managed the season really well. I’m really proud of us taking a step back and saying ‘I’m not doing the combined or super G. I’m just focusing on my events.’ It put more pressure on the GS and slalom, but it worked out.”

What sets Mikaela Shiffrin apart as one of her sport’s greatest champions is her perspective. She doesn’t get caught up in the hype. She endears herself to the media not so much as a champion, but as a real person who passionately cares about her sport.

“It’s really cool. But, to be honest, I don’t really know what it means yet,” she said. “I wasn’t thinking about that. Today my real focus was just on the day – on both my runs and my own skiing. I wasn’t trying not to worry about anybody else – any of the other skiers.

“Today it wasn’t about three medals,” she said. “It was just about today and one medal.”

Christl Cranz would have been proud.