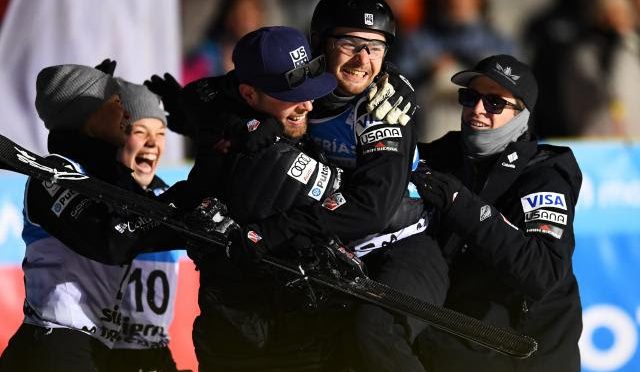 Sierra Nevada, Spain – If you would have told Ashley Caldwell and Jon Lillis when they first met nine years ago, that they would win the World Championships together, they wouldn’t have believed you. But that’s exactly what happened on Friday night at the 2017 FIS Freestyle Ski & Snowboard World Championships in Sierra Nevada where Caldwell and Lillis stomped their quadruple twisting triple flips to land both the men’s and women’s titles.

The night started out a bit shaky for Caldwell, who missed the landing on her first jump, a back layout followed by two flips and two twists. But once she knew she made it through to the next round, there was no looking back. She scored the highest in the second round with her full, full, full and landed the win with the full, double full, full and a score of 109.29.

“Doing the [full, double full, full] is scary, but part of me wants to say that’s why I do better,” said Caldwell, of Ashburton, Va. “I’m more focused on the trick instead of the competition. That was only my third time doing that trick and I was just focusing on surviving.”

As usual, Caldwell was the only woman who competed triple flips the entire night. Although she’s struggled with consistency throughout the season, Caldwell was calm and focused in the final two rounds Friday night, putting the jumps to her feet and scoring a full 10 points above second place.

“I’ve put a lot of hard work in to try to be good at doing triples, and that means taking hits and risking more,” said Caldwell. “Sometimes it doesn’t work out and I forfeit good competition results because I miss a landing. To come out here and re-affirm that what I’m doing can work and is the right path is huge for me and my mental state going into the Olympics next year.”

Lillis’ victory was the first of his career and only his second major international podium. Like Caldwell, he struggled on his first jump, edging out teammate Mac Bohonnon to make it into the second round. He went on to post the highest scores in both the second and third finals, taking the win with a full, full, double full and a score of 125.79.

“I did what I needed to do tonight,” stated Lillis, of Rochester, N.Y. “I’ve done that trick in super finals three times this year, and all the other times it’s been a bust. But tonight I hit my take off and did everything else right and was able to throw it down. The coaches called my plan from the beginning and we stuck to it. The plans we made today were perfect and they got us two gold medals.”

“This is the greatest end to the season that we could have possibly hoped for,” said Head Aerials Coach Todd Ossian. “This gives our whole team a ton of motivation going into the summer and the Olympic year.”

The U.S. team also advanced Kiley McKinnon and Madison Olsen  to the super final. McKinnon landed just off the podium in fourth ahead of Olsen in fifth. Bohonnon finished 10th. Rounding out the women’s podium behind Caldwell were Australia’s Dani Scott in second and China’s Xu Mengtao in third. China’s Qi Guangpu took silver for the men and Australia’s David Morris took bronze.