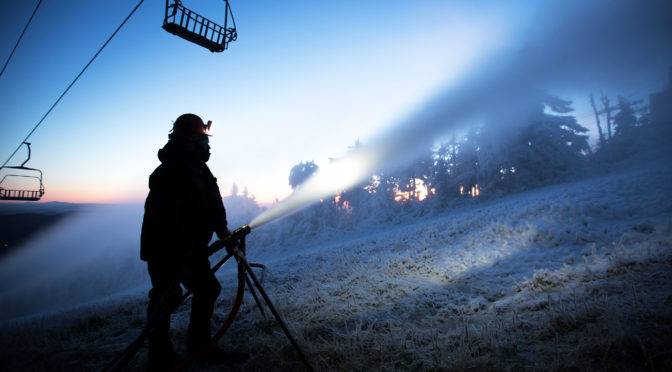 Killington, VT – With ski season already underway in the West, Vermont’s Killington Resort has begun to get ready in the East by commencing snowmaking in advance of the 2017 Audi FIS Ski World Cup on November 24-26. Killington Resort was the first North American ski mountain to open its season to the general public in 2016 and last to close in 2017 for Eastern North America, in part because of the resort’s advanced snowmaking system.

While there is no confirmed window for Opening Day at this time, snowmaking lit up on Killington and Skye Peaks just before 11 p.m. Monday for testing prior to the season and the approaching Audi Ski World Cup races.

Killington has dedicated a snowmaking team to specifically build the race venue on Superstar where the women’s slalom and giant slalom races will take place. Killington’s snowmaking system has the ability to pump more than 720,000 gallons of water into 240 snow guns, covering 80 acres with 12 inches of fresh snow in a matter of hours.

“When it comes to snowmaking and grooming, we have the best team and tools in the industry to prepare Killington for the winter season and World Cup on Thanksgiving weekend,” said Mike Solimano, President and General Manager of Killington Resort. “Last year, we were able to put on a spectacular World Cup weekend and operate our lifts for more than 200 days before closing on June 1 because of our snowmaking team. Our snowmakers are ready to work with Mother Nature for another monumental World Cup and winter season.”

The general public is invited to view the women’s giant slalom and slalom races from free general admission areas or from the grandstands as a limited number of premium grandstand tickets remain available when Killington hosts the Alpine World Cup event for the second year in a row. The free viewing areas will accommodate approximately 12,000 spectators and Killington will provide free parking and an enhanced shuttle system for event spectators during the weekend. Appropriate attire for winter weather is recommended for the outdoor venue, including sturdy waterproof shoes and multiple layers. No pets, lawn chairs or coolers will be permitted in the Expo Village. In addition, Dispatch will headline a music and entertainment lineup for World Cup spectators.