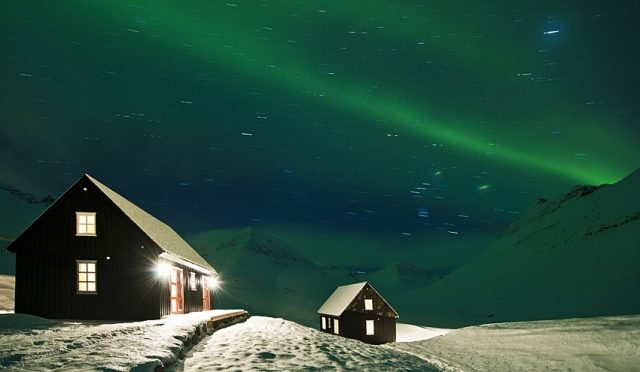 Dalvik, Iceland – There was enough to see in Iceland to occupy our 15 days spent on the island in March 2015, including several days with Arctic Heli Skiing.

Alaskan heli-skiing is in many ways the closest available analogy to heli-skiing in Iceland. As in Alaska, Icelandic mountains are treeless and offer big vertical runs. The terrain in Iceland is less consistently steep than it is in Alaska, but that offers more flexibility to ski the best snow most of the time. It’s very difficult to ski in bad light at Iceland’s northerly latitude, but the island nation’s weather is highly variable, so multi-day shutdowns are more rare than they are in the 49th state. Terrain in Iceland is vast, so one sector will often have good flying weather while others are socked in, as evidenced by the fact that a four-day package at Arctic Heli Skiing includes the same four hours of flight time as you’ll purchase with a one-week package at Points North in Alaska.

Customers are picked up at the airport in Akureyri, in the northern part of Iceland a short flight or four-hour drive from the capital city of Reykvavik on the island’s southwestern coast. After working for many years for Selkirk-Tangiers Heliskiing in Revelstoke, B.C., arctic owner Jökull “JB” Bergmenn returned to his family’s sheep farm in a valley south of Dalvik and opened a ski touring lodge, to which he added helicopter skiing after several years of operation. Skiing takes place mostly on the Troll Peninsula northwest of Akureyri. The Troll Peninsula may look small on a map, but I can assure you it’s vast, and having available that large an area is important to maximize clear weather options. Terrain looks good everywhere; the key is finding decent visibility for flying and skiing. During our visit we also needed to get above 2,000 feet of elevation to find good snow, though good surfaces may often be found all the way to sea level.

However, Iceland is thinly populated with a population of only around 400,000, some 80% of whom live in and around Reykyavik. This allows JB to fly into small towns for a local lunch, or embark upon a “Grand Tour” into the volcanic interior of Iceland as he did in 2013 that included a first descent of the 5,500-foot Herðubreið volcano and a soak in a rugged canyon hot spring accessible only to helicopters and birds.

JB himself guided our group on the first day, along with New Yorker Jamie and his 16-year-old son Michael.  We first flew down the valley past Dalvik. Our landings on this first day were generally at elevations between 4,000 and 4,500 feet, where temperatures held around 20ºF. Winds were sometimes brisk along the ridgelines, but quickly disappeared once we descended a short way. There was some wind-affected snow near the landing zones, but we would typically ski into more sheltered areas where softer powder had been deposited.

Partway down the first run dubbed “Killer Sheep”, JB stopped to dig a pit, as 30-40cm new snow  had fallen since a big rain event several days earlier.  Around 2,000 feet ASL the snow became heavier, requiring more forceful turns to carve through it, before turning to a rain crust for the final 15% or so of 2,500 vertical-foot runs.

Our first three runs were all south-facing with better visibility, but at this latitude the March sun is not yet strong enough to affect the snow. We dropped off the north side of where we had been skiing for our fourth run. We were afforded expansive views of Hrisey Island in the Eyjafyordur along with some snowmobilers at our sixth drop point. Arctic will also ski in the mountains across the fjord above Grenevik if the weather there is better than on the Troll Peninsula.

After starting our day at 10 a.m., we had already skied over 16,000 vertical feet before stopping for lunch between 1 and 2 p.m. March daylight lasts here until 8 p.m. JB called it a day at 4 p.m. after 10 runs and 24,100 vertical feet, as the light became more flat — difficult for skiers and pilots alike. That was my fourth highest vertical-foot total in 28 days of heli-skiing, but JB remarked that often they ski much more when with good snow at lower elevations, runs can often extend to 3,500-4,000 vertical feet. One annual group from Stowe, Vt. has logged as much as 82,000 vertical feet in a day.

The following morning we boarded the heli a half an hour earlier and skied the higher 5,000-foot mountains closest to the lodge in slightly colder temperatures and windier conditions. In 2014 there was so much snow in the valley in March that the road was buried and guests had to be shuttled to the lodge from Dalvik by helicopter. In 2015, though, more storms had approached from the southwest, accompanied by rain at lower elevations.

We were guided on our second day by Stefan, a French Canadian. Our first two runs started on a perfectly pitched long face on the east side with excellent snow. We crossed to the west side for our next two runs and some unusual scenery decorated by a vertical rock spire formed by a lava flow into a fissure that later crumbled away. Our fourth run had blown-in powder earlier in the week, but the wind was now strong in our faces, so Stefan had us picked up after only 1,500 vertical feet.

We moved back to the east side of the valley, but the wind precluded a high landing so we were dropped at about 3,500 feet. The rain crust from Thursday was now more supportable and could be skied fluidly as long as visibility was decent. We skied two similar runs before and after a 2 p.m. lunch, but with deteriorating light we skied to the lodge to end the day at 3 p.m. after 16,600 vertical feet.

On our final day with Arctic Heli Skiing we skied two low-altitude runs from the lodge, constrained by weather. After a hearty Icelandic lunch of hashed fish, JB let us borrow a car to head to the Akureyri airport to begin our two-day marathon drive around the east and south sides of Iceland.

Arctic Heli Skiing’s Klængshóll Lodge accommodates 16-20 skiers, with a mix of heli and ski touring in March. We had two heli groups and two touring groups at the lodge on our first two days with Arctic Heli Skiing, before a third group of heliskiers arrived for a week-long stay. Touring groups can be driven to trailheads or can pay for a heli drop into more remote terrain. Klængshóll Lodge has a hot tub and sauna, and the family style meals were excellent, featuring fresh local lamb and fish.

JB recruited other guides from Selkirk-Tangiers like Stefan, who works at both operations as Selkirk-Tangiers’ demand slows in March, which is the “early season” in Iceland. Arctic Heli Skiing’s peak season is in April and May, when Iceland is bathed in 16-20 hours of daylight and is blessed with better weather. By late May it is possible to ski at midnight with sun on the northern horizon, and skiing still takes place at higher elevations in June. Arctic Heli touts its corn snow and big vertical, and can find powder on north-facing slopes and corn on sunny exposures at the same time. The lodge is usually filled with heliskiers in April and May, when ski touring operates primarily out of a second lodge near Dalvik.

About 60% of JB’s customers arrive from Europe, with the remainder hailing from North America.  Reykvavik is a four-hour flight from the U.S. East Coast, at least as accessible as western Canada for easterners and far closer than Alaska. From the U.S. west, direct flights of about six hours are available from Seattle and Denver. For 2017 the four-day, four-heli-hour price at Arctic Heli is €7,300 euros, and the six-day, six-heli-hour price is €10,300.