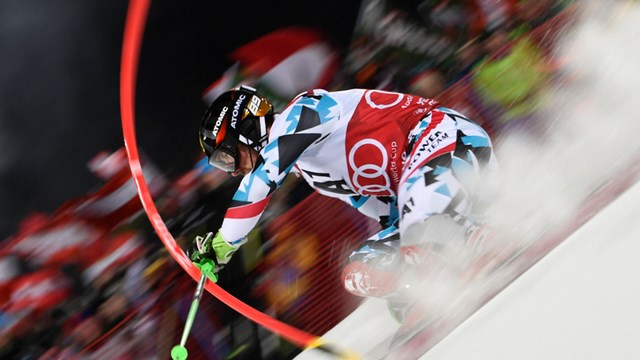 Schladming, Austria – Robby Kelley—the top American finisher at the Audi FIS Ski World Cup slalom in Schladming tonight—delighting the crowd by hiking back up the course to finish 27th, over 50 seconds off first place.

Over 60,000 wild fans showed up at the night race in Schladming, an annual tradition just two hours down the road from the weekend’s races at Kitzbuehel. Marcel Hirscher of Austria looked like he was going to take his second slalom victory in three days, putting down a blazing second run in front of the home crowd. But Henrik Kristoffersen of Norway, who won first run, was determined to beat Hirscher once again. Kristoffersen fell behind at the middle splits on his second run, exciting the roaring Austrian fans, before turning on the gas at the finish to steal the win. Alexander Khoroshilov of Russia was third—making it the same exact podium as at last season’s Schladming slalom.

Even though it was his third slalom victory in Schladming (and his fifth this season), “I actually did not know that the finish bridge lights up green when you’re in front and red when you’re behind,” Kristoffersen confessed. “My teammate Sebastian (Foss-Solevaag) told me this summer. Before the second run, I was like, ‘Don’t look at it! Don’t look at it!’ I came through the last split and was like, ‘I gotta look! No! it’s red, I gotta go!’ So I was a little stressed, but I think I charged it at the bottom there so it was pretty good.”

“I knew it exactly when I crossed the finish line that the last fifteen gates were not good,” Hirscher admitted. “I was too shy, not enough to go one-hundred percent of risk through the last fifteen gates. It’s my personal mistake, but better eighty points in the books than zero points for today. I’m getting closer to Henrik, that is good and he deserved it anyways and skied excellent.”

Kelley, who finished 25th first run, was skiing well on his second run, before falling just before the finish. But taught never to give up by his parents, the Starksboro, Vt. native hiked for almost a minute to complete the course. The crowd went nuts, cheering on the devoted American. “I’m tired—very tired—but it was worth it!” said Kelley. “It was a great feeling to cross the finish line here. This is the best race of the year. I would have liked to be 48 seconds faster than I was, so I’m a little disappointed.”

David Chodounsky (Crested Butte, Colo.), who was 11th at the Schladming World Cup last year, did not finish. “Mentally, I’m there,” said Chodounsky. “Something is going on—this is too many DNFs in a row, weird stuff going on that’s not by chance. We’ll fix whatever is going on and be ready for World Champs.”

Next up, the men head to Garmisch-Partenkirchen for two downhills—one a makeup race from Wengen—and a giant slalom.