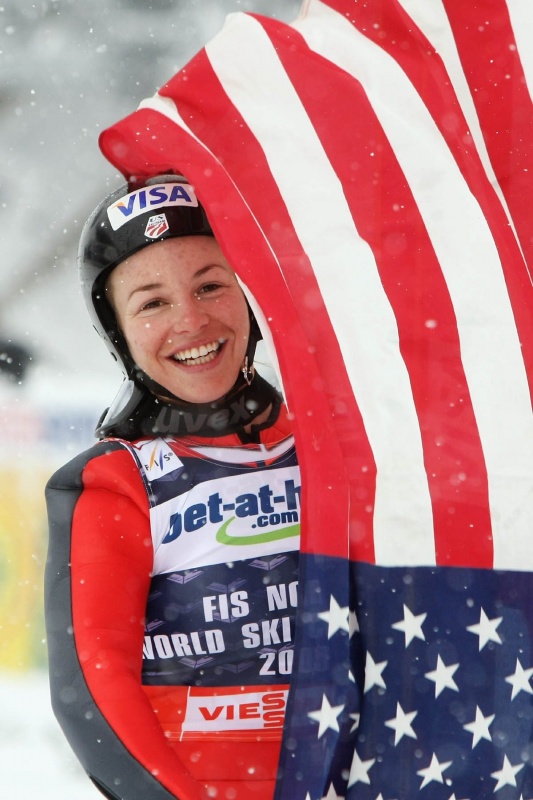 Eight months after she donated bone marrow to help a cancer-stricken man, the doctors said they needed twice the number of stem cells they took from her last spring — which was 500 million.

Last time, Van agreed to be on-call when the doctors needed her marrow. She ended up donating just two weeks after competing in the World Championships in Oslo, Norway. This time, she was recovering from ankle surgery, which caused her to miss the historic opener of the first-ever International Ski Federation Women’s World Cup circuit.

She agreed to donate again, fully aware of the discomfort and possible issues the procedure may cause her in getting back to international competition.

“Someone asked me for cells to help save their life and there’s no reason why I wouldn’t do it again,” said the 27-year-old Park City, Utah resident. “It’s the right thing to do.”

Van has never met the man whose blood DNA is identical to hers — it’s an anonymous process. It’s also extremely rare to be a bone marrow match for another person. Once you’re listed on the Be The Match Registry, the National Marrow Donor Program puts the odds at about 1 in 540 that you will go on to donate to a patient.

Recently, Van flew to San Francisco to go through a series of extensive physical tests to make sure she was healthy enough to donate again. While there, she received some of the best news of her life — her “patient” was in remission, and her donation last spring had indeed saved his life.

“It was so cool to hear he wasn’t sick anymore and to know that my bone marrow helped him,” she said.

Once back in Park City, Van underwent five days of filgrastim injections to move more blood-forming cells from her bone marrow into her bloodstream.

“There’s some flu-like symptoms and nausea, but that’s about it,” Van said.

Then she went back to San Francisco to go through the donation process. Blood is removed through a needle in one arm and cycled through an apheresis machine, which separates and collects blood-forming cells, platelets and some white blood cells from the bloodstream. Plasma and red blood cells were then returned back to her through a needle in the other arm. A healthy person’s body, like Van’s, will regenerate the donated cells within four to six weeks.

“I was very tired because your body works so hard to process all this blood through the machine,” she said. “You get some pain in your bones — hips, ribs, sternum. It doesn’t last too long and then you feel healthy and healed and it’s fine.”

Her additional donation will be available should the patient need more treatment in the future.

“The fact that Lindsey was willing to make a second donation to this patient speaks to the importance of commitment to donating when people join the registry,” said Nadya Dutchin, national account executive for the National Marrow Donor Program and Be The Match.

Van said she’s ready to get back to the business of being an elite athlete. In October, doctors removed cysts in her ankle that were pinching a nerve and causing her left leg to go numb as soon as she put on her jumping boot.

“I’m just training every day and jumping as much as I can to get my ankle and leg strong again,” said Van, who added that she hopes to compete on Jan. 6 in Schonach, Germany. “I’m so motivated by the success of our team and Sarah win. I’m ready to get back out there.”

The team’s Head Coach Alan Alborn said not many elite athletes would donate bone marrow and take themselves out of training at the start of a World Cup season.

“Obviously, this is a huge show of character for Lindsey,” Alborn said. “She’s confident enough in her jumping that she knew she could take this on and I knew she could handle it too.

“This means so much for Lindsey to donate and it’s far better to do something like this for someone else, to then give herself inspiration. I know her results will reflect that.”

Van originally signed up two years ago for the Be The Match Registry after feeling helpless when her roommate was suffering from Leukemia.

“My friend (who’s now in remission) told me at the time to just sign up, and so I did,” she said. “Now, I’m lucky enough to have helped save a man’s life and I would want someone to do the same for me or my family members and friends. I would encourage anyone to sign up on the registry.”