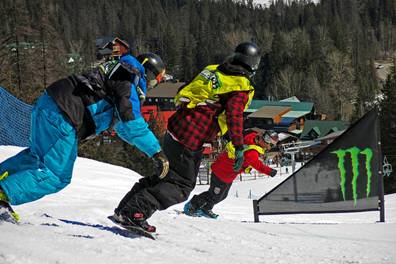 Fernie (BC), Canada – On March 17th & 18th, the popular Monster Boarderstyle event will be returning to Fernie Alpine Resort for season number two. It’s a high energy race and party event hosted by Monster Energy and the B.C. ski resort.

Monster Energy first introduced at the Shred Show in 2011, pitting four snowboarders at a time in a head-to-head boardercross-style race integrated with big slopestyle terrain features. This combination of mandatory spins and flat-out speed is a crowd favorite.

This season’s tour started off last weekend at SilverStar Mountain Resort, followed by Fernie Alpine Resort and concluding at the finals in the Bethlehem of Boarderstyle, Whistler Blackcomb.

The snowboard-only event consists of Men’s and Women’s Open categories. Every stop of the Monster Energy Boarderstyle Tour is free to enter and open to all competent riding abilities.  On top of cash prizing, the winners of the Fernie event will receive invites (including transportation and accommodation) to compete in the final event at Whistler Blackcomb. Register online to compete in Fernie and don’t forget about the after party, details to be announced shortly.